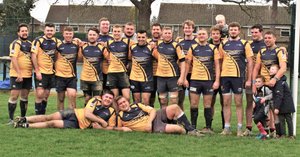 Top of the Table Clash

The Sussex 4 top of the table clash between leaders Holbrook and second place Pulborough III provided a very competitive and entertaining match. Facing their strongest opposition since the start of the season, Holbrook had to dig deep and remain totally committed for the full 80 minutes to secure a 13 – 3 victory, extending their unbeaten run to 12 games.
From the kick-off the determination and desire to win was clearly evident from both sides, the work rate from both teams was intense and a closely fought game unfolded. With the game so tight both sides tried to exploit every opportunity, often beyond what is permitted by the laws of rugby union, leading to a very high penalty count. After 14 minutes Pulborough were awarded a penalty in front of the post and took the lead 3 – 0.
Despite some good attacking rugby following the restart, Holbrook were not able to exploit the pace in their backs because of the strength of the Pulborough defence. As the game progressed the initial intensity of the match was maintained and the quality of rugby on display got even better. Pressure from the Holbrook pack resulted in a penalty and through the boot of scrum-half Joel Murray Holbrook drew level 3 – 3 going into the half time break.
After the break, the Holbrook pack dug even deeper and enjoyed a period with the majority of the possession and territory but strong defence from Pulborough kept the score even. After a period of play dominated by scrum after scrum, Holbrook were awarded a penalty in front of the Pulborough posts, but may be feeling the pressure of the moment the kick went wide of the right post.
Holbrook continued to push hard, trying to break through the Pulborough defence close to their 5m line and were awarded a penalty. This time Murray’s kick sailed between the posts and Holbrook took the lead 6 - 3 with 5 minutes to go. Holbrook gathered well at the restart on the right of the pitch, moved the ball quickly through their backline to left wing Tom Smith who ran from deep within his own half to score a try under the posts. Murray added the conversion to take Holbrook to 13 – 3 with just 2 minutes to go.
Pulborough worked hard to put the pressure on Holbrook in the final moments of the game, but the final score remained Holbrook 13 – Pulborough III 3.
Holbrook captain Connor Pascoe commented afterwards, “Pulborough were the best side we have played this season and while this was not our biggest score it was our best performance of the season so far.”
Holbrook are in cup action away at St Francis on 4 February, before returning to their league campaign with a local derby away at Horsham III on 18 February.
Share via
FacebookTwitter
https://www.pitchero.com/clubs
Recent news