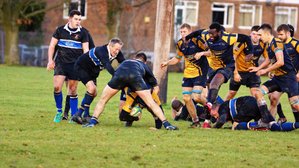 The Sussex 4 West league leaders Holbrook faced Sussex 3 side St Francis in the quarter finals of the Sussex Bowl cup competition. Despite their strong form in the league of 12 games unbeaten, Holbrook knew they would encounter fierce opposition in the form of much bigger and heavier pack when they travelled to Crawley based St Francis. The Holbrook game plan was simple, total commitment to take on and tire the bigger St Francis pack in first half and then use the fitness, speed and agility of the Holbrook backs in the second half.

The very muddy and wet pitch favoured the St Francis forwards and their “up the jumper” style of play but Holbrook’s strong defence and determination from all 15 players resulted in a close contest. St Francis had the edge in the set piece scrum of which there were plenty given the slippery conditions. It was clear that the game was going to be tight, so when Holbrook were awarded a penalty, there was no hesitation from fly-half Andy Collins who with an impressive kick put the visitors three points ahead.
Both sides continued to play some decent rugby, but Holbrook were able to put together a series of plays that put St Francis under pressure through both the forward and backs. Holbrook were rewarded for their hard work when scrum-half Joel Murray scored a try close to right post. Although they could not add the conversion Holbrook had increased their lead to 0 – 8.

At the restart St Francis raised the intensity, putting Holbrook under real pressure deep in their half and were then awarded a 5m attacking scrum. It was clear that St Francis were expecting a push-over try, but were denied this as the Holbrook pack managed to lock-out. But in the next and final phase of play of the first half, St Francis scored a try. The half time score 5 - 8 in favour of the visiting Holbrook.

The second half continued to be a closely fought contest and it looked like the side that scored first would come away as winners. For nearly 10 minutes St Francis were in possession and deep in the Holbrook half, but the Holbrook defence dug deep and St Francis were not able to breech the wall of yellow shirts. The St Francis pack were beginning to tire and Holbrook found a little more in the tank and took the game deep into the St Francis half and were rewarded with two tries, first from scrum-half Murray and then from front row Sam Bolitho taking to score to 5 - 18.
With just minutes to go the ball was spun out to left wing Adam Davies, who used his pace to run from the half was line only to tackled just short of the line by the St Francis full-back. Final score St Francis 5 Holbrook 18.

Holbrook now progress to semi-final of the Sussex Bowl and will play Brighton III away on 18th March.

The league campaign in Sussex 4 West resumes for Holbrook on 18th February when they play away at Horsham III.