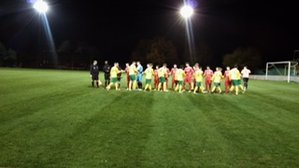 Holmesdale made it two wins in 4 days by defeating Tunbridge Wells in the challenge cup. The dalers were in confident mood after Saturdays 5-0 win over Phoenix Sports Reserves and thoroughly deserved the win over their premier league opponents.

Tunbridge took the lead midway through the first half in controversial circumstances. A cross into the box was punched away by George who was fouled and injured in the process but the referee waved play on and whilst the keeper stayed down in the box a second cross came in which was easily scored by the Tunbridge Wells striker.

This seemed to spur the hosts on who were much the better team leading up to half time and created half chances through Gannon, Williams and Fenech who all failed to convert.

The second half started very much how the first half ended with Holmesdale well in control, dominating the possession but lacking that finishing touch. Williams had the best chance for the hosts when a brilliant ball from Rawsthorne put Williams in on goal but he couldn't quite lift the ball high enough over the onrushing keeper. The goal the dalers fully deserved came after 78 minutes when sub Reggie Yembra struck a left footed drive from the edge of the box into the corner. Yembra then had a golden opportunity to win it in normal time when a ball into the box from Palfrey left the striker with a header from 6 yards out which he put wide and meant the game went into extra time.

It was Holmesdale who took the lead in the final minute of the first half of extra time when brilliant play from Danny Gannon put Devontae Young in on goal with the keeper and he coolly slotted home his first goal for the club. Holmesdale's progression was secured in the second half of extra time when James Teodorescu was brought down in the box and Jaie Nuttall dispatched the penalty to make it 3-1. Young had the opportunity to make it 4-1 in the dying seconds but he blazed over the bar after an excellent run.