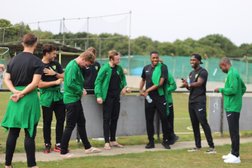 8 Goals and first league win in 5

After 5 league games without a win, 5 first half goals followed by a further 3 in the second half inflicted a 16th straight league defeat for Lewisham Borough

Holmesdale returned to winning ways with an 8-1 thumping of basement club Lewisham Borough.

It took the hosts only 5 minutes to open the scoring when a long free kick from Nuttall was headed home by returning captain Dan Palfrey. It was 2-0 after 13 minutes when a great ball from Hooper put Ishmail in the clear who was fouled in the box and the resulting penalty was cooly despatched by Nuttall. The 3rd goal came after 18 minutes with a lovely finish from Gannon who chipped it over the onrushing goalkeeper and it was 4-0 after 21 mins with Gannon this time providing an assist for Anthony Fenech. A 5th followed when Palfrey scored from a corner before Lewisham got a consolation before half time.

It took Holmesdale only 4 minutes to score again in the second half after a swift counter attack was finished off by Jamie Williams. Weedon and Lawson came on for Williams and Yembra with Weedon involved in the 7th goal after playing a lovely through ball for Ishmail to go round the keeper and tap home. The 8th and final goal was the pick of the day, Danny Gannon scoring a 25 yarder to further confirm the dalers dominance. Overall a comfortable win against opposition lacking in confidence and the dalers will go into next weeks game at Rusthall in confident mood.