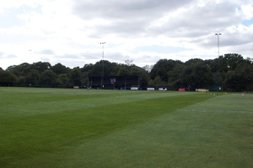 Holmesdale hit in form Phoenix for 5

Holmesdale made it 2 league wins in 3 games with a comfortable 5-0 win over in form Phoenix Sports Reserves. The visitors had won 4 out of their last 6 games going into today but never really got into the game after a dominant performance from the hosts.

Holmesdale started on the front foot and should have taken the lead after 8 minutes when a flowing move ended with Jamie Williams standing a great cross up for Charlie Weedon who somehow missed his header from 5 yards out. Danny Gannon had the dalers next chance when a great through ball from Anthony Fenech put him one on one with the keeper but a heavy touch round the keeper meant the angle was against him and he fired wide.

Holmesdale continued to play some exciting attractive football and finally got the goal their play deserved on 32 minutes after a shot from Anthony Fenech was diverted into the net from Danny Gannon.

Holmesdale put the game to bed with a 15 minute blitz at the start of the second half scoring 4 goals without reply. Gannon scored his second of the game after 47 minutes when a bicycle kick from new signing Tom Beckingham was tapped in from the striker from 4 yards out. Next it was Anthony Fenech's turn to get on the score sheet with a free kick on 53 minutes and Charlie Weedon made it 4-0 2 minutes later diverting a James Teodorescu cross into the net. The final goal and goal of the game came on 60 mins after a great through ball from Teodorescu was brilliantly finished by Gannon who chipped it over the on rushing keeper.

Manager Ian Varley used the remaining minutes to give debuts to new signings Devontae Young and Jamal Daley as well as bringing Reggie Yembra on from the bench. Young and Yembra both had chances to score further goals for the dalers but the score remained 5-0 and gave the hosts a much needed 3 points.