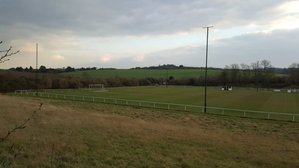 Holmesdale hit for 6 at Sutton Athletic

Holmesdale suffered a heavy defeat at the hands of free scoring Sutton who have now scored an incredible 62 goals already in the league this season. The Dalers went into the game in good form having beaten Phoenix in the league 5-0 and then step 5 opposition Tunbridge Wells in the cup but produced a below par performance which Sutton took full advantage of.

The game was over after 40 minutes as poor defending and some good finishing from the hosts put them into a 5-0 lead. Danny Gannon got one back just before the half time whistle but the game was over as a contest. Holmesdale improved in the second half but failed to convert the numerous they had and Sutton added to their lead with a great goal from outside the area.

The Dalers are struggling to find any consistency at the moment but will look to get back to winning ways at home against Orpington next week.