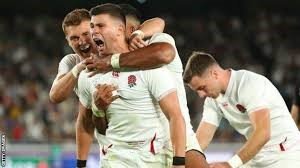 "In a week which brought both bad and good news, Holt Rugby Club demonstrated their determination to keep the game going and offer their supporters some sort of spectacle under the tightest of constraints. On Halloween Saturday the club acted as hosts for a touch rugby tournament.
Despite the dreadful October weather, the club held an attractive and competitive contest at Bridge Road. Both Holt and local rivals North Walsham fielded two teams each. Holt A ran out comfortable winners against North Walsham B in the first game; North Walsham A then defeated Holt B; North Walsham then won the battle of the B sides. The final game saw a close-run contest between the two A teams with the visiting side emerging just on top.
However, as Holt Chairman Martyn Jackson put it: “The occasion was far more important than the result. It is to the immense credit of all concerned that, while observing strict precautions, we were able to hold the event. A lot of thought and effort was required and we succeeded”.
The bad news is that there will be no full 15 -a-side competition this year. The English Rugby Union had decided that, whenever restrictions are eased, it will be too late to have effective league rugby with promotion and relegation.
The good news is that Holt’s most distinguished old boy, Ben Youngs, secured his 100th English cap on the same day as the touch rugby tournament. He scored two tries against Italy and England went on to win the delayed six nations and Ben was man of the match. The club are confident that the production line of players is in good shape and that there will be more top-class players in the making".
Written by Martyn Sloman
Share via
FacebookTwitter
https://www.pitchero.com/clubs
Recent news