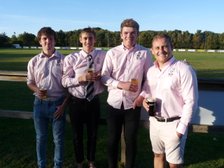 Thank you to Iain MacBrayne for this match report:

Holt remain league leaders with a bonus point win but were made to dig deep to overcome a very spirited performance by their hosts.
Holt were awarded two penalties after early pressure, one of which was converted by full back, James Wyatt. Thurston responded with a penalty converted by fly half Kieran Cusker.
Holt were not making it easy for themselves with unforced errors and giving away too many penalties. Relief came with a driving maul which resulted in a try for hooker, Kyle Routley, converted by Wyatt to make it 3-10. Holt fly half, Geoff Flather, then glided through the home defence to score under the posts with Wyatt converting for a 3-17 lead. Cusker for Thurston closed the gap to 6-17 just before half time with a penalty kick.
Holt got off to a good start in the second half with a try by Robbie Gray, converted by Wyatt to make it 6-24.
Thurston were still enjoying their fair share of possession and testing the Holt defence with strong running from Cusker and their captain Ed Barron. A thirty metre driving maul by Thurston resulted in a try converted by Cusker which reduced the deficit to 13-24.
Robbie Gray scored his second try after receiving a clever reverse pass from Bruce van Poortvliet .The conversion by Wyatt made it 31-13 and he completed the scoring with his ever reliable boot when he converted a try by The Norfolk Brewhouse Man of the Match, Henry Flower, who out-paced the Thurston defence down the right wing. Another young player to impress was Ollie Jaggard who came off the bench for the last quarter of the game to make his first team debut and looked very assured at fly half.