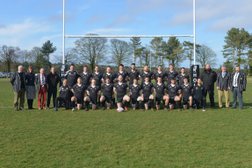 A game notable for a high penalty count

Holt went into this local derby game as clear favourites and came out beaten by a well organised Fakenham side who played with great
spirit for the full eighty minutes.
Holt started strongly and were 10 points up in as many minutes. Fakenham received their first yellow card after 3 minutes; James Wyatt converted the resultant penalty to give Holt their first 3 points. This was quickly followed by a Bruce Van Poortvliet try when he won the chase for the loose ball after an attempted clearance kick was charged down, James Wyatt converted.
Fifteen minutes into the game Lloyd Marshall made it 3-10 with his penalty kick soon to be followed by another James Wyatt penalty, making it 3-13.
Fakenham's Tom Bane -Young was next to score with a strong run down the right wing and his unconverted try reduced the deficit to 8-13.
At a crucial moment, just before half time, Fakenham's Ashley Steward touched down for a try converted by Marshall to give them a 15-13 lead at the turnaround.
After the break, try as they did, Holt were not able to settle into their normal expansive game. Despite receiving another yellow card and giving away the majority of the penalties Fakenham managed to disrupt the Holt set pieces and were more effective at the breakdown. They were rewarded with a try by Lyam Taylor to make it 20-13 in their favour.
The rest of the game was most notable for the high penalty count. Holt were not able to make the best of their opportunities apart from two more penalty kicks from the reliable boot of Wyatt which closed the gap to 20-19.
The final points came from a penalty kick by Marshall which gave the home crowd much to celebrate.
Share via
FacebookTwitter
https://www.pitchero.com/clubs