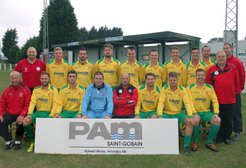 Holwells season ended as it had started way back on the 9th August with a home defeat, this time at the hands of Holbrook.

Holbrook avenged their defeat in the reverse fixture just before Christmas by punishing Holwell for not taking their chances.

Holwell were without Foster (golf) which resulted in Smith gaining a recall to the starting line up while Wells was passed fit enough to make an appearance on the bench following a hamstring injury. Also returning to the bench was manager Daws after completing his 6 game stadium ban for an altercation at Ellistown back in February.

Holwell began the match knowing that a victory would guarantee 8th spot in the EMCL with a total of 62 points, compared to last seasons 9th place finish and 61 points total.

Holbrook however had other ideas and two second goals was enough to condemn Holwell to their 13th league defeat of the season.

Holbrook started the game the better and were guilty of wasting a couple of opportunities as well as forcing Stainsby into so sharp saves to keep the scoreline level.

Holwell fought back as the half progressed and had chances of their own to take the lead, but unfortunately Mooney fired wide and then over with Holwells clearest openings.

The second half began and with Holwell on the front foot but for all their endeavour could not create a goal scoring opportunity to which Holbrook punished just before the hour mark when Hazeldine cut inside from the Holbrook left and fired into the top corner past a helpless Stainsby.

Holwell had an opportunity to hit back almost immediately when a Stevenson corner was met by the head of Hibbitt but unfortunately usually his trustworthy head, headed wide on this occasion.

Holbrook continued to threaten on the counter attack and were given a golden opportunity to double their lead when Randall fouled Chilaka and a penalty was awarded. Stainsby however was up to the challenge and saved well down low to his right before quickly gathering the rebound.

Holbrook didn't have to wait to much longer to double their lead however when Hayes taped in after a good run and cross from Chilaka.

Holwell refused to give in however and pressed forward trying to find a way back in to game. That route came when Hibbitt fired home his 10th goal of the season from the edge of the broke with his weaker left foot.

With time running out Holwell were frustrated in their efforts to create another chance by good game management from the Holbrook players, but right at the death Chapman found Mooney but his hooked effort went harmlessly over the bar and that was that for 2014-15 football season at Welby Road.

Despite the defeat Holwell ended up finishing in 8th place after Arnold failed to beat Borrowash.