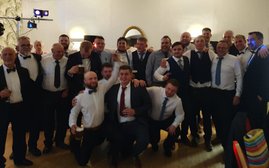 Valley brought the final curtain down on a successful season with the return of the club dinner.

In between an excellent meal provided by our hosts, Sickleholme Golf Club, and some dance moves that will have "Strictly Come Dancing" wondering what they've been missing out on, the Club's senior officials handed out the following awards:-

Additional presentations were made to Phil Edge in recognition of his long service to the Club and Georgina Gibson for her post-match hospitality at The Woodroffe.