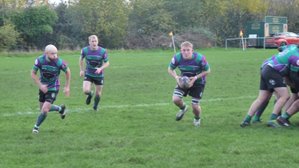 Valley overcome everything apart from the scoreboard

Availability issues caused problems again for Valley as they made their first trip in four years to Heaton Moor and the problems increased when The Dirty Dozen were reduced to The Magnificent Eleven due to the world's first known case of two hour flu.

Moor graciously loaned Valley three players to make the task slightly less daunting, but, on the home club's massive 1st XV pitch, the one man advantage still seemed likely to play a huge part in the outcome. Despite this it was the visitors who started the better, Steve Rawson and Jake Oldridge's shrewd tactical kicking pinning Moor deep in their own territory and only some over eagerness and strong defence prevented a score.

With 15 minutes gone Valley suffered a double blow, losing Jae Rodgers to injury and conceding the game's first try and, clearly shell shocked, they lost the game within the next ten minutes as Moor ran in two more tries to lead 17-0.

Valley gradually fought their way back into the game, Jack Greaves' refusal to give up producing several try saving tackles whilst Jake Oldridge consistently tried to get the team on the front foot and this effort was rewarded when Will Boot carried several would-be tacklers over the try line for a score converted by Oliver Tibenham. There was a glimpse of a comeback, but it was quickly extinguished as, straight from the kickoff Moor added another try just before the half time whistle (22-7).

There were no recriminations at half time, but within ten minutes the game was out of reach as the home team added three more tries (41-7) and Jake Oldridge was also lost to injury. A lesser team would have folded, but not Valley, skipper Matt Keeley, having his best game of the season, was making some trademark, tackle breaking runs and was on the end of a clever Will Boot pass to score an unconverted try.

This stung Moor back into action as they added another score (48-12), but still Valley's fire would not be extinguished as firstly Will Boot added his second try before Steve West got on the end of a superb run by one of the Moor loanees to add the final score of an entertaining game, played in the true spirit of rugby.

Man of the match: It could easily have been shared by all eleven Valley players, but ultimately it was shared by Steve Rawson for a typical livewire performance in both attack and defence, Pat Coupar for his all-round workrate and Kyle Boot, who put in a massive shift of ball carrying and scrummaging.
Mandy of the match: It'd have taken a 6'6" fly half with a set of ladders to reach one of Steve Rawson's passes, instead it fell into the arms of a Moor player who raced away for try.

Next Saturday (03 Dec) Valley face their last away game of the year and their longest trip as they travel to the league's basement club, Wirral RUFC, in a relegation battle (ko 1415hrs).