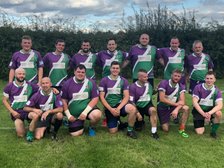 When I asked for somebody to provide match details for the report I was somewhat dubious when Ben Somerton immediately volunteered, when I received “Ben was gud” written in his son’s favourite crayon I was even more dubious. Fortunately Matt Eyre was on hand to rectify the situation.

Travelling to Bowdon to open their 2019-20 league campaign Valley were once again hit by the perennial problem of late -cry-offs, meaning they started the game with only 13 players. However, this proved to be no problem as strong forward drives set up Jake Oldridge for a converted try and when a powerful Will Boot run put Matt Keeley in for a score (0-12) a comfortable afternoon seemed on the cards.

Of course Valley don’t like comfortable so they gifted Bowdon seven points with a penalty try before failing to deal with a kick through, allowing the home team to tie the scores.

This only served to spur Valley into action and a trademark chip ‘n’ chase saw Jake Oldridge reappear on the scoresheet (12-19) before some fluent handling put winger George Henson in for a converted score (12-24).

Bolstered by the second half appearance of David Ryder, Valley were now in full control, choosing to run a penalty Matt Keeley crossed for his second try before a typically powerful Ben Somerton try put the result beyond doubt, Bowdon’s late score being no more than a consolation.

A huge improvement on the previous week’s performance, but still much to work on before next Saturday’s visit to Marple 2nd XV, who opened their season with an emphatic 55-7 win at Didsbury Toc H.

Men of the match: Christian Barnett and Jae Rodgers