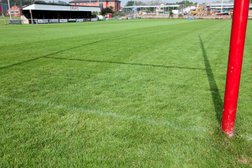 Hollismen gearing up for restart

All,
I thought it prudent to write to you all with a brief update in terms of our club at a time when things hopefully may be turning somewhat of a corner, in terms of living with Covid-19.

Firstly, I hope everyone involved with the club and their families have managed to stay well, hopefully in good health and unaffected by the virus. For those that have been impacted in any way, my own and the thoughts of the club are with you.

I just want to update you on a few things, as I eluded to in previous communications.
You will know that as a committee we made a decision that if we were unable to hold a properly convened AGM by the end of June, I would ask the committee to “roll over” and essentially commit to two year term in office.

As you will realise, we were unable to hold an AGM, resultant of this I asked the present officers to remain in post. I am happy to say that almost everyone agreed to do so, the exception being Andy Keyworth who, has expected, was unable to continue as Chair of the M&J section. More about that later. To that end, in essence the officers elected in 2019 will serve until April 30th, 2021. My thanks go to all of them. I am particularly delighted that Gareth Laycock will continue as Captain.

In addition, as we have been unable to convene an AGM, we have also extended the accounting period until April 30th, 2021. This has been done in agreement with both the RFU and the club accountants, Lloyd Dowson. A two-year set of full accounts will be produced at this point. However, what I am happy to report is at present, the clubs balance sits at around £16,000, excluding the spend expected on flood lights replacement, estimated at around £1200. At a time when many local and larger clubs find themselves in severe difficulty financially, this is something we should be extremely positive about and is testament to our ability fund raise and manage money, prudently. This of course is in no small way due to the tremendous generosity and support of you, the members - in addition to Steve Crook’s relentless ability to raise funds. Remember we have not been able to hold our two main fund raisers, the regatta and the golf day, although we are trying to arrange the latter in an appropriate socially distanced format.

In terms of sections, the men’s adult section has recently returned to training, following the RFU and HMG guidelines, in preparation for our return to Yorkshire League rugby, as reported by Steve earlier this year. This is a positive move that both Steve and I have been advocating for some time but a decision that had to be made with the players consent. Our talented, young squad, under Gareth’s leadership voted overwhelmingly to return to a more competitive structure. I have no doubt they will surprise a few people, including themselves. To have 30 people at a training session is remarkable and long may it continue.

The ladies’ section has also returned to training, again in preparation for the commencement of competition. Ask me 10 years ago about a ladies team, I probably would have smiled wryly in dismiss and ignorance. I now find myself being perhaps their biggest fan. The section is a welcome breath of fresh air at the Rec and the organisational ability and endless enthusiasm is a very positive aspect within the wider club. I am sure the support they have enjoyed over the last two years will only grow.

Finally, the Mini & Junior section continues, under new leadership. With Andy Keyworth standing down as Chair, Scott Morley has very kindly stepped in to lead the section, ably assisted by former club captain, Matt Havler and Pete Woolsey. Early indications are that the new team will not only build on the amazing work carried out by Andy but perhaps take things in perhaps a different direction, with success, I have no doubt. Andy has long been a friend of mine, but I would like to take this opportunity to formally thank Andy for his work in the section. Running the M&J section is perhaps the most difficult aspect of managing any sports club as the activity is tireless and for the most part remains unseen. Andy is to be congratulated and Scott, Matt & Pete will be afforded the full support of the wider club.

It should also be noted that during this period, the Hollis Recreational Ground committee ceased the collection of subscriptions. This support was greatly appreciated by all clubs.

As for the future, whereas we remain at point B on the RFU roadmap of the return to rugby, F being the return to competitive action, the future at Hornsea is bright. We have a strong, First XV squad that is raring to go, a ladies section that is very enthusiastic and ever developing and an M&J section under new stewardship, with ambition.

Financially we are in excellent health and a committee that gets things done, all with the support of our new main club sponsor ResQ, who of course have the thanks of all.

My final point is to offer thanks and lavish well deserved thanks to Mr President, Steve Crook. We all know that Crooky is the nicest guy in the world and has Hornsea RUFC running through his veins. However, his actions throughout the early part of lock down not only made local and national media, it also became the highlight of my own and many others day. A seemingly simple gesture that meant so much to many people. Thank you, Steve.

I will close now and wish all well and hope to see you all at the Rec very soon for a game and a beer.