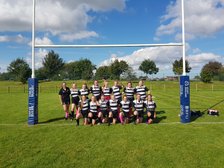 Houghton girls turned up today with a strong squad on a cold and miserable day. Playing over the road due to waterlogged pitches the girls in black and white came out on fire after a particularly loud warm up again.
From kick off strong running centre Mia beeston recieved a great pass from jess who stood at first receiver and scored in the corner to give them a 5-0 lead. On the restart Houghton invited a bit of pressure on themselves by a high tackle allowing blaydon set piece in their half. A good play by blaydon saw their outside centre score inside the 15m. A high K/O saw a good tackle by Abbie and kenzie over the ball to turnover but a loose pass saw blaydon pass the ball along to the wing and make 50 m. Speedster sinem making the covering tackle and front rower sophie cleaning the loose ball up. However no extra support made it back and blaydon swiftly turned the ball over and scored in the same place, 10 mins into the game.
From the kickoff the senior back rowers started to up their game and saw same great interplay by the three of them making 30 m and increasing the pressure on the good blaydon defence. It saw young ref ashman give Houghton their first penalty for infringements at the ruck 5m out. Powerful no.8 carys decided it was time for a tap and go and powered under the posts for Houghton 2nd try of the afternoon. Jess converting the try.
No problems collecting the restart and cleared down field by the boot of jess. Forwards from blaydon not getting the ball in straight and Houghton opting for the lineout. This time carys linked with Casey twice making great yards and good rucking allowing quick ball saw kenzie pick and go to score under the posts. Jess converting.

Blaydon kicking off high and a great catch by sinem who started off through the middle making 40m. But no support from the rest of the team saw blaydon turn yet another ball over. A few minutes later saw Houghton with a scrum in the centre of the pitch and picked by carys offloading the ball to Skye interlocking with kenzie who made good metres and popping to newcomer angel and scoring her first try for Houghton with a great body angle keeping low.
Jess now consistently getting quick ball started to release her outside backs and forward runners off 10, with Erin controlling the forwards. With yet more quick ball jess to ering who released sinem again through the middle who raced away but quality chasing by the blaydon girl caught her on the line and should of tackle the openside. Try scored under the posts. Jess converting.
Blaydon playing some good wide rugby in the wet conditions saw the ball in the wingers hands with a 1v1 against lyza who made a crackling tackle causing a knock on cleaned up by the ever present carys. With Houghton starting to apply more pressure on blaydon 4 penalties in a row in the red zone saw the blaydon captain spoken to by the ref. Tap by carys but was well tackled by the ever present 2nd row jess sniping round the corner and scoring.
After Mia reintroduction on the wing she bursts through the middle and passes for the first time in the afternoon loops around and continues to make good yards before offloading to wing lyza. However Houghton off feet at breakdown saw blaydon take a quick tap but the slippery ball hit again and lyza down on the ball bravely to secure possession. With no 9 there Houghton started playing some good rugby with some good shotguns through front rower Charlotte. High tackle gave Houghton the advantage and spun wide to kenzie offloaded to fellow back rower sinem who scored another well worked try.
KO claimed by kenzie but then knock on in contact saw some good blaydon pressure testing the tiresome defence. Houghton standing strong as a team and turning the ball over through Katie and eva counter rucking Charlotte cleaning up and making more yards. Sophie in at 9 again picking and sniping round the corner making some good metres but winded in the tackle saw her come off injured. Blaydon now with their tails up for the final 5 mins saw some continuity and making good yards into the strong Houghton defence. Pressure telling and penalty awarded to blaydon 5m out. Blaydon converting the pressure into points with a well worked try.
Houghton regaining the ball from kickoff by another newcomer chloe. With Houghton told they must use the ball they started to go wide but maybe forced it too much with no support and lost the ball. Blaydon pinged it to the other side of the pitch to finish the game on a high scoring in the corner.