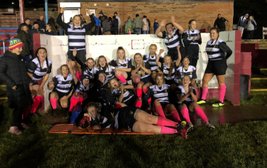 Houghton run away from H&P

Houghton travelled to eden park for the first time this season hopeful for their 1st win in the national cup. An hour before meet time however the team was struck by illness and the only trained scrum half (jess) called in sick. However a quick reshuffle of the backs saw Sophie Lamb start at 9 for the very first time.
With the crowd building the Houghton girls decided to step the noise up which immediately saw the opposition step up their noise, creating a great cup atmosphere.

H&P won the toss and choose to kick off. From the first play H&P were up for the game instantly turning the ball over and attacking the Houghton Line. However numerous big tackles and last ditch tackles saw the Houghton defence stay strong. After 10 minutes of intense pressure the ball was spilt in a tackle and the ball landed at the feet of sinem who ran on a right hand arc round the defenders and all the way under the sticks.

After the kickoff came another intense period of pressure with the girls from H&P seriously testing the defence of the diary lane girls. However the defence saw numerous turnover from the outstanding backrow and inside centre. H&P being persistent they would be attacking in Houghtons half. On 25 minutes what has become a trademark of the season already Mia ripped the ball on her own 10m line and ran the distance with the conversion being kicked by Carys.

This time Houghton secured the kick off played a couple of phases and saw another try this time by carys. Running down the right wing crossing the line in the corner but trying to get under the posts she was almost tackled out of play just getting the ball down in time.

After pretty much 27 minutes of pressure H&P got some good go forward from their powerful driving maul from half way managed to recycle the ball after a great tackle by lyza and saw one of their strong runners go down the left and after the last ditch tackle by sophie lamb slowed her down there was no extra support and the H&P player went over 15m from the touchline. A great conversion narrowly missed the posts and went wide.

The kickoff saw houghtonn finally putting pressure on H&P inside their half which was a welcome relief to the away fans. A knock on from H&P saw the Houghton scrum a great attacking opportunity, which had been steadied by the introduction of sophie fenwick. Sophie lamb put the ball into a now solid scrum and hooked by Robyn straight to the feet of carys at no.8. Picked the ball up and ran straight and hard at the defence with sophie lamb in support of the powerful 8 scoring under the posts.

After the frantic end to end first half the half time talk was to try and tidy up the ball in very wet and slippery conditions however this went straight out the window as Houghton went running straight through to score minutes after the 2nd half kicked off.

Kickoff was claimed by Charlotte who had scrummaged well all day ran forward making a determined 20m run back into the H&P half. However it was clear the end to end running was starting to affect both teams with the rain not helping matter and for the next 5 mins saw both sides knocking the ball on. But saw some great tackles in from kenzie, chloe, eva and sinem. After a good scrum by H&P saw them ship the ball along the backline and scoring just to the left of the posts which saw their kick sneak the ball over the posts.

The next ten mins saw both sides go hard at each other good runs by Houghton through angel and kenzie down the side saw noise erupt from the away fans. Erin at 10 started to control the game putting her forwards into holes however Houghton just couldn't find that last pass knocking on after some good running by Isla as she was set to score. Houghton then tried a different tact trying to bash their second rows Katie, eva and Amelia up the middle which saw them creep forward and quickly shipped it out wide which saw Abbie on her first return to eden park running down the left wing but a brilliant tackle brought her down on the 22. The ball changed hands again and they drove the ball forward but some big hits by Houghtons prop tegan saw them halt inside the 22. H&P cleared their lines with Skye in open space for the first time saw her make some good yards into the 22 which resulted in Houghton scoring.

A substitution which saw a standing ovation for kenzie saw eva back on the field in the new position of flanker. Straight from the start of play H&P went through the middle of Houghtons defence to score under the posts and with the hosts sniffing of a few more tries with their tails up Houghton stepped the play back up keeping the ball deep in the opposition half. Houghton finally gaining ground through some good running by Amelia saw Houghton given a penalty 5m out. After a slow reaction to the penalty carys decided it was time for route 1 and crashed over for the final try of the game. Tegan converting.

Meeting at clubhouse foor a 19.00ko