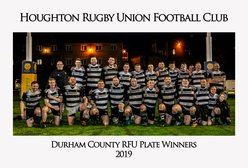 Houghton's club house was booming for the annual feast along with the rugby world cup being played. A large crowd attended and they were given a eight try show in an entertaining match.

Houghton showed promise straight from the off and were soon in Tech territory. A quick penalty seen Craig Hicks trundle toward the line but forward pass halted play. Tech had a powerful scrum and were disrupting Houghton, however the referee adjudged it to be illegal and awarded the penalty. Captain Matt Marchant opted for post and young Alex Tuckwell converted.

Miscommunication form the kick off seen the ball bounce into Tech hands. Unfortunately the big prop was seen to lead with he's elbow into contact and Houghton awarded the penalty. A good Tuckwell clearance seen a Houghton lineout on half way. A text book throw by Michael Carr was taken clearly by Newton Turton. Quick hands by Tom Birtley seen powerful centre James Ross take a flat pass. A barnstorming run seen him beat the full backline to score, converted by Tuckwell.

Tech seemed to be fired up from the score and had several minutes of possession. Unfortunately the route one attack was easily read and Glen Atkinson turned over possession. The ball was offloaded to Michael Carr who had a rush off blood and put a three person miss pass in which went to ground.

Houghton looked to be heading for the second try of the game when big Chris Watson timed a run beautifully. The secondrow forward was steaming toward the line, only to be caught by an ankle tap which he then knocked on. Luckily for Houghton the referee had spotted an off the ball incident and awarded Houghton the penalty, slotted by Tuckwell.

The first half finished with Houghton somehow only leading by only thirteen points. H/T 13-0

Tech came at Houghton for the first five to seven minutes after kick off. Great defence work lead by Adam Reay, George Greenshields, and Newton Turton halted any real threat that was posed. The coaches rang the changes not long after and brought Ryan Pink, Kieran Smith and Danny Bradley on to the field.

Houghton eventually broke the deadlock around the sixty minute mark. A good passage of play with forwards and backs linking
seen the ball change direction. A pod of attacking forward were set up and lead by Ryan Pink who drew in the defence and popped to Evaldas Gurskis to crash over.

Houghton scored again within two minutes of kick off. A good take by Matt Marchant was offloaded to Hicks, new scrum half Danny Bradley switched play to Marchant. The prop floated a low pass to Ryan Pink and with two would be defender lining him up. He outrageously popped the ball between he's legs to the supporting Mbongeni Moyo who went forty metres to score, convert by Alex Tuckwell.

Houghton soon got the bonus point after a Craig Hicks turnover seen Moyo released, the fullback danced around the defence and raced clear. Now with only the fullback to beat Moyo unselfishly passed inside to the supporting George Greenshields to score, converted by Tuckwell.

Houghton now with the game won, looked to attack after every opportunity. A deep kick off was taken by Pink and he released Turton with a flat pass. Quick ball by Bradley seen James Ross carry hard yet again. The centre got deep inside Tech territory before passing to Moyo who came from the back to support and score a good try, Tuckwell converted.

Techs heads were almost down as they started to argue after missed tackles. However a bouncing ball which was left by Pink and Watson from the kick off give them hope. They looked to get a score as there impressive number eight crashed forward. Kieran Smith had other ideas as a textbook tackle and turnover seen Houghton turn defence into attack. Quick hands seen George Greenshields in ten metres of space and the rapid winger put he's ears back to race under the posts, converted by Tuckwell.

Techs heads went down and after a good Matt Marchant catch, Evaldas Gurskis passed to Glen Atkinson. The flanker timed a perfect pass to Newton Turton who rolled back the years to race in for a try from thirty five metres, converted by Tuckwell.

The final try came right at the depth as Houghton were caught knapping. A sneaky dink kick was taken by there flanker and two hard carries seen them press hard. James Ross leading the defensive line, ushered Ryan Pink forward to make the tackle. A big hit and drive seen Houghton gain possession and a box kick by Danny Bradley was read beautifully by Mbongeni Moyo. The fullback took the ball in he's stride and scored he's hattrick under the posts, Tuckwell allowed Moyo to kick which he converted.
F/T 60-0
Man of Match Mbongeni Moyo