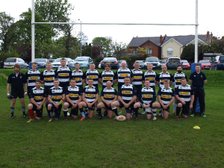 The Boars this week took on a very strong Sunderland 2nds who seemed to have a similar mix of youth and experience to the Boars team.

Sunderland kick off, Boars gather and set up an attacking pod - Matty Carruthers moves the ball to the backs, Paul Ridley ships to the centres Lee Bainbridge and then onto James McKiegan who is tackled just over half way, the Boars pack are slow to the breakdown which enables Sunderland to turn the ball over, Their big No.8 then ran a direct line straight through three Boars tacklers (poor show people!!), Sunderland then put phase after phase together but where hit back at every opportunity by some ferocious tackling and ended up being held up over the line.

Paul Ridley clears after a good scrum up to half way. Sunderland have had all of the possession and territory in the opening 10 minutes piling on the pressure and testing the resolute Boars defense, a penalty was inevitable however and the Sunderland No.10 who had been running the show kicked for 3 points - Boars 0 Sunderland 3

Boars kick off and its more of the same, Sunderland's No.8 running hard lines along with the rest of the pack and the Boars tackling not relenting, again a penalty was bound to come after another 5 minutes of pressure - Boars 0 Sunderland 6.

The Boars have been starved of the ball for a full 16 minutes, finally we have a chance! Rob Middlemass runs a hard line and bounces a few Sunderland defenders out the way, fast ball is given to the backs and knocked on, scrum to Sunderland which the Boars steal, Carl Harvey breaks from the scrum and passes to Matty Carruthers who passes to Paul Ridley who moves it quickly to Lee Bainbridge - dear me this is looking promising, Bainbridge passes to Josh Hawkins who runs another 10 yards and is bundled into touch - sad times.

Sunderland now bereft of ideas have started to kick everything, David Cummings handled every single kick for the full 80 mninutes expertly (i literally lost track of how many times they kicked so just had to badge it up in one sentence!!)

Another scrum against the head and Carl Harvey breaks from the back and offloads to Lee Bainbridge who breaks tackles like a boy band member breaks hearts but his off load is knocked on.

More sunderland pressure and its knock on city population both teams, scrum after scrum more pressure from Sunderland with their No.10 kicking for corners and David Cummings fielding everything, Sunderland actually decide to run the ball now and put some phases together which culminates in Allan Scott doing a no arm tackle just outside the Boars 22 - Penalty, Sunderland No.10 kicks for posts 0 - 9.

Boars start to get hands on ball and James McKiegan makes a fantastic brake, beats numerous defenders in a 40 yard run, offloads to Paul Ridley who ships it to Lee Bainbridge however it was knocked on.

Boars experience makes way for the youth of the club with Daly Green, Ethan Forrester and David Price entering the game.

Second half starts and the Boars are straight on the attack with Daly Green carrying the ball some 10 - 15 yards only to see Neil McKnight knock on.

For the next 10 minutes its very close with possession changing hands frequently after knocks ons from both teams.

Boars backs now have some possession and use it well with a move from Matty to Paul, Paul to Lee and loops back round to collect the ball back off Lee, the Boars are putting phases together now, 4 phases in and Daly Green brakes a tackle and offloads to James McKiegan who makes good ground, ball is quickly moves the other way by Matty Carruthers and some excellent hands see's Dan Turnbull running towards the corner with two men to beat, will he pass it or go for glory....................pass to the ever pressent Glen Crowther who has been all over the pitch today like a rash, Glenn scores in the corner - Conversion missed - 5 - 9.

More kicking by Sunderlands No.10 who has clearly been watching too many Wolrd Cup games as he's kicked more than George Ford today, however David Cummings is a machine today.

On around the 55 minute mark Gary Spoors brakes through and runs 60 yards with the full back to beat he offloads to James Mckiegan who knocks on!

Lee Bainbridge brakes another tackle and gets over the gain line offloads to Daly Green who's nearly clear to score a try, the Sunderland full back forgets what game he's playing and in a Vinny Jones style two footed slide tackle puts Daly down, the referee seemed oblivious to this and let Sunderlnad run away down field with the ball - disgusting turn of events btw!!

The Boars are now determined, the ball is moved through the backs brilliantly and the offloads are killing the Sunderland defense, James McKiegan gets it and breaks through two tackles to score under the posts, Gary Spoors converts 12 - 9.

Sunderland pile on the pressure and the Boars scrum weakened by the removal of the big lads is struggling, Sunderland realise this and have a penalty on the Boars 5 meter line, they opt for a scrum and eventually get a push over try which is converted 12 - 16.

Boars push and push for another try but nothings coming, Sunderlands No.10 kicks again and again to pin the Boars back, Gary Spoors gives away a penalty for being off his feet at the breakdown and its kicked 12 - 19.

This is it, its the last roll of the dice for the Boars who deserve to get something out of the game - the ball is shipped from Paul Ridley to Allan Scott who passes to Lee who then passes to Josh Hawkins who is again put into touch.

Last play of the game and its the Boars attacking through Lee Bainbridge again he brakes a tackle and is baring down on Sunderlands try line when a Sunderland player grabs his collar in a clear high tackle and Lee is dragged to the floor, the referee who again saw nothing lets Sunderland clear and blows for full time!!

Man of the match - David Cummings
DOTD - The referee