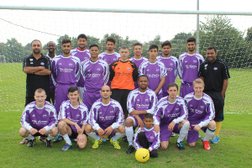 Saj Panesar's class of 2014/15 took to the field against LCOM Champions New Hanford in this seasons Div One (West) seasons opener.

With only five players remaining from last seasons squad of 45 meant a number of new faces and plenty of debuts within the Purple Haze ranks. The match itself was evenly contested and credit to the new boys who didn't look out of place at this level with a fully committed team display. The only goal came in the 43rd minute when the quick footed Hanford forward latched onto an error and slotted home with ease.

Manager Saj Panesar said "I'm pleased with the display today, the boys are still getting to know each other and gave a championship winning team a real fight for the points, we can only get better. The league wanted us to remain in the Premier division but the club decided that we needed to wipe the slate clean, release all our previous players and rebuild with a young, focused and hungry team with a plan for longer term success.