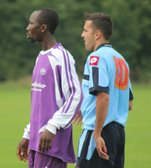 The Purple Haze are still searching for their first points of the season after Imperial Old Boys defeat.

Hounslow Wanderers suffered their second defeat in as many games as they succumbed to their own downfall away to Imperial College Old Boys. Captain Shaun Andrews responded, “We dug our own grave today but I’m confident we will learn from our mistakes.”

Wanderers started confidently and it was midway through the first half they went one up as Shaun Andrews scored from a well taken free kick. Wanderers gifted the home side an opportunity to equalize just before the break and Imperial College dually obliged.

The Purple Haze fortunes turned from bad to worse as Yinka Ojedele (pictured) had to replace the injured Wanderers Goalkeeper.
After the break the home team began to press and it was another gifted opportunity which put Imperial College ahead. Wanderers fate was sealed ten minutes from time as the home team closed the game off to finish three-one victors.