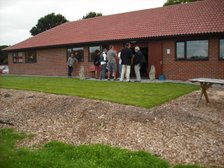 Hungerford Rugby Club's first incarnation dates back to 1929 when a group of gentlemen met over beers and pipes in the Plume of Feathers and decided to form the club. The team played regularly until the outbreak of war in 1939 and it was not until 1984 when in almost identical circumstances another group of enthusiasts met in the John O’Gaunt, however minus pipes.

Starting as a Sunday morning XV with home games played on Hungerford Common, courtesy of the Town and Manor, the club gradually grew in number and in reputation as a sporting club with a lively social side. More Saturday fixtures were taken and the standard of rugby improved and in 1987/88 the decision was taken to join the newly formed Courage League. In that first year Hungerford found itself up against strong opposition in the Berkshire Dorset and Wiltshire, Division 1 and since then the club has seen varying levels of success in Dorset and Wilts Divisions 2 and 3. In the last few years we have moved back over to Berks, Bucks & Oxon leagues moving up into the Premier Division where it currently resides.

One of the trademarks of the club is its annual overseas touring tradition which has taken it to France (four times), Italy (twice), Portugal, Ireland (twice), Belgium, Malta, the Czech Republic, Germany, Spain, Hungary and Estonia. In the last few years the tours have been a little more local however the spirit of fun and togetherness and prevailed.

Hungerford Rugby Club has its home at the Triangle Field which was the culmination of more than a few years of planning and applying for planning permission. The clubhouse was completed in 2006 and in now the proud centrepiece of the playing facilities. Since the opening of the clubhouse Hungerford RFC has been able to add a sizeable Mini and Junior club membership with players from Under 7s to Under 12s. HRFC now enjoys facilities of a quality that match that of many larger clubs.

The badge shows a lion, representing our home country of England, holding a rugby ball and supporting an English rose, the red Lancastrian rose is to remind us of Hungerford's early association with John O'Gaunt (then Duke of Lancaster). The lion's claws rest upon John O'Gaunt's Horn given to the town in medieval times and still blown annually from the balcony of Hungerford Town Hall to denote the start of celebrations at Hocktide or Tutty Day every spring. A replica of this horn hangs behind the club bar.

This club crest was designed by Martin Simons, former club president in 1983 when the club reformed and reflects well the strong ties which link it to the traditions of Hungerford and its history.