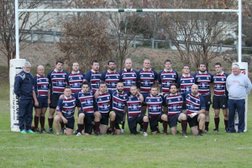 A well played victory for the Wild Turkeys

The Wild Turkeys started the game off firing on all cylinders and scored within 2 minutes of kickoff for the first of 8 tries. Fluid ball movement by the back-line and great ball retention by the forwards allowed Huntsville to dominate the entire game. Gadsden got close to scoring a couple times, but Huntsville defense was fierce as the kept Gadsden from getting on the score sheet.

When the final whistle blew, Huntsville had prevailed 50-0. Both teams then took part in a third half to give new players more game time and experience. Huntsville again dominated the half and won 36-0 bringing the days total score to 86-0.

Huntsville's next game is on 18 March in Memphis against the Dry Gulch Renegades.