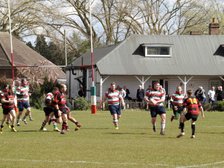 Ilford Wanderers kicked off their 120th birthday celebrations in some style by gaining promotion to London 3 North East. In a powerful display against the combative Norfolk side, Wanderers showed they are saving their best form to the last , overlooking the last minute withdrawal of cornerstone Tighthead Chris Smith and controlling the game almost from first to last.
Ilford got off to a cracking start, having 7 minutes off constant pressure inside Wymondhams 22, which eventually led to a scrum 5 and No8 Reece Barney crashing over. A second try came shortly after via Tighthead Jack Handley who made the most of replacing Smith in the starting lineup by scoring 4 in total.At12-0 it was looking ominous for the visitors but, showing grit and determination, they put themselves on the scoresheet with a well worked try and conversion.At halftime they were back in the game but were struggling to cope with Ilfords attacking game. Fly Half Alfie Waddens put in a searching kick over the Wymondham 22, a good chase and tackle on the fullback , turnover ball , and Centre Graham Bailey was over the whitewash. Handley popped up for his second try swiftly followed by a second for veteran centre Bailey and with the score at 31-7 Ilford were moving through the gears. Arguably the best try of the day was created by a steaming run from Fullback Alex Burbank, close to the touchline, resisting would be tacklers and passing to Lock Darren Donovan who moved the ball on to 17 year old Centre Alex Dean to score.Dean was involved for the next try giving Graham Bailey his second and Ilford a 45-7 lead.Ilford were now at full tilt, with off the top lineout ball by Donovan,
allowing Handley to crash over. The lineout provided Ilfords next but this time it was a stolen Wymondham ball taken on by Jason Taylor to give lock
Dan Libby his first score.Showing great resilience Wymondham worked another try from the back of a scrum and kicked a penalty, leaving the score at 59-17 and the stage perfectly set for Handley to round off an impressive personal performance with his fourth.

Ilfords Last game of the season is the Essex Presidents shield Final at Eton Manor on 14/06/16. In between on 07/05/16 they are celebrating Irish Day at their Forest Road Ground, all are welcome.