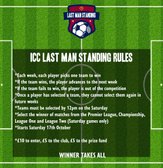 £10 to enter, pick a winner from each Saturday's football matches

Luke is running a Last Man Standing Tournament to raise money for the club.

*Each week, each players picks a team to win
*If the team wins, the player advances to the next week
*If the team fails to win, the player is eliminated from the competition
*When a player chooses a team, they cannot select them again in future weeks
*Choices must be submitted by 12pm each Saturday
*Choice will be made from matches in the Premier League, Championship, League One and League Two (Saturday games only)

The overall winner takes the money.

...the match is abandoned/postponed/cancelled?
*Players can select a team to win from all English matches on the Sunday

...the final players left all get eliminated on the same day?
*These players will share the prize as they got the most consecutive correct picks