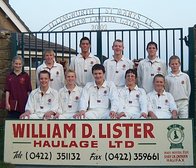 “Dennis”, was a valued member who followed the Club from near and far for many years. He supported the Club in many different ways, for example being the match shirt sponsor for Junior and Senior teams as well as using his haulage company “William D Lister Haulage Ltd” to further the club e.g. bringing Headingley Stadium ground seating from the Western Terrace to be used at The Ainleys, Jammy Green, Alloe Field View.

David Lawton recalls "the last 2nd XI game of 1973 at Steeton when Dennis provided transport to the game. Alex South was drafted in, amongst others, to make up the team at the end of the season. We had a good time after the match. As a good HTFC supporter Dennis appreciated Alex providing inside information as to his footballing exploits at the Shay."

The Club send sincere condolences to the Lister Family, especially son, Ian (1st XI #389) and grandson Ben, who played against Illingworth in the Airedale & Wharfedale League.

The funeral service will take place at Park Wood Crematorium, Elland on Thursday 28th October at 11.15am.

Family flowers only please, but donations may be made in lieu, to Cancer Research UK.
All enquiries to Emotions Funeral Service, Tel: 01422 345472.