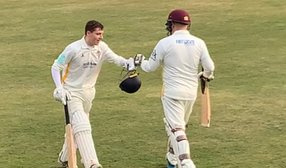 Report by P A Smith

Illingworth and Otley played out an entertaining pre-season friendly in front of a large crowd at Alloe Field View, Illingworth on Sunday. The game was being played in memory of Sam Smith, a former player of both clubs and a former 1st XI Captain and Secretary of the Illingworth club who tragically died in a road accident whilst working in the USA in November 2021. Many of Sam's former teammates and friends from both clubs were in attendance to see nearly 450 runs scored across the 80 overs.

Otley, one of the most successful clubs in the Airedale & Wharfedale Senior Cricket League, batted first and some rusty bowling and generous fielding from the home side allowed Otley to post 245-5 from their 40 overs, Alex Atkinson top scoring with 68 for the visitors, whilst 15 year-old Isaac Thompson took a creditable 2 for 31 from his six overs.

It was another of the home club's juniors, Jake Fellows, who shone with the bat in reply, hitting 96 after coming in with the score on 17 for 4. Fellows's innings contained 8 fours and 6 sixes, and he was caught at mid-on off the game's penultimate ball, trying to reach his century. Damon Reeve picked up 3 for 27 for Otley.

The cricket was not the main focus of the day though, as money was raised for the Royal National Lifeboat Institution, a charity chosen by Sam's family. An auction of a signed Alex Lees England Lions shirt along with a raffle brought in a total of £450 for the Charity and the whole day’s proceedings were a fitting tribute to the memory of Sam.