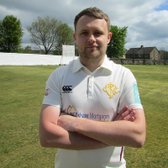 Premier Division leaders Illingworth had a battle at Shelf Northowram before coming out on top to maintain their sixteen point lead.

Put into bat, the visitors lost early wickets and were struggling at 64-4. Matthew Smith 41 and Veryan Brooksby 41 helped to steady the ship but their dismissals led to another mini collapse and at 151-9 it didn't look as though the league leaders had a sufficient total to defend on the high scoring ground. A club all time record for the last wicket of 87 between Matthew Watson 50 and an undefeated 48 from Jamie Moorhouse, beating the previous record of 83 which had stood for 57 years, saw Illingworth eventually post the formidable target of 238 and altered the entire complexion of the match. Jack Hemblys was the pick of the home bowlers with 3-39 and Kieran Pritchard and Aamir Rashid also picking up three.

Shelf Northowram got off to the worst of starts with star run getter Dan Cole clean bowled by Luke Brooksby in the first over. Wickets fell at regular intervals after that with only three home batters reaching double figures, finally ending in the 26th over for just 87. Stephen Cook took 3-11 and both Luke Brooksby and Jamie Moorhouse also picked up three each, with a neat run out from Veryan Brooksby to add to the mix.