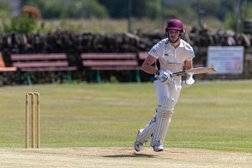 League leaders Illingworth suffered only their second league defeat on their trip to Triangle and their lead at the top of the table shortened to just nine points.

Put into bat on a slightly damp surface, Illingworth's batting was again found wanting and a score of 223 was always going to be hard to defend on the small ground. Callum Cook held the innings together with a well struck 90 with the next top scorer Hamza Mehmood on 29 but the innings faded away as the visitors lost their last five wickets for just 36 runs. Carl Fletcher was the pick of the bowlers with 4-67 and Kurtis Whippet and Richard Turner both bagged three each.

Fletcher made it an all round performance as he bludgeoned 56 off just 24 balls as the home side sped to victory with three wickets to spare helped by some uncharacteristic sloppy fielding by the league leaders. Luke Brooksby always looked dangerous and his figures of 3-74 hardly reflected his contribution.