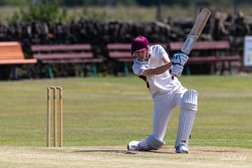 1st XI win top of the table clash at Booth

In a tense and exciting finish Illingworth extended their lead at the top of the Premier Division to sixteen points with a two wicket victory at champions and second place Booth.

Put into bat, Booth lost early wickets and were struggling at 54-4. A fifth wicket partnership of 87 between Richard Laycock (54) and James Watson (38) looked to be putting them on top, but when Laycock departed at the hands of opposing skipper Ben Robertshaw, the tail followed quickly. Luke Brooksby (5-36) picked up three quick wickets the home side faded to 183 all out in the 41st over.

In reply, the visitors looked to be coasting for victory at 65-0 but a fifteen minute stoppage for a heavy thunder shower seemed to change the face of the game. Matty Smith (35) fell to the first ball on resumption and with the loss of two more wickets soon after, the game had a different slant at 85-3. Hamza Mehmood (54) and Richard Farrell Smith looked to have mended the damage with a stand of 75 for the 4th wicket and seemed to be coasting to revenge for their semi final cup knockout on the same ground three weeks previously. An injudicious shot from Hamza and the unlucky run out of Farrell Smith brought back memories of their late collapse in the previous match and, when the visitors lost three more wickets for just six runs, the tension levels reached fever pitch. Skipper Ben Robertshaw was up to the challenge and calmly punched the ball through the covers to bring his side home by just two wickets with twelve overs still to go. Booth's Usman Saghir, Matthew Hoyle and Richard Laycock all bagged two wickets apiece but in the end to no avail.