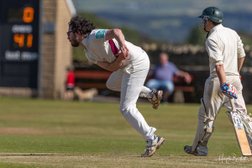 Premier League leaders suffered only their third defeat of the season at the hands of Parish Cup winners Thornton at Jammy Green. Put into bat the visitors were in all sorts of trouble at 41-5 and 71-6 before a seventh wicket stand of 107 between Ross Parr and Josh Hutchinson put the game seemingly out of reach. Hutchinson contributed just over half of his teams runs with 118 off 107 balls and hitting eight sixes on the big ground as they finished on 232-8.

The home side got off to the worst of starts slumping to 40-5 with four lbw decisions going against them and never really recovered. Luke Brooksby steered them to a batting bonus point with an unbeaten 46 as their lead at the top was cut to seven points with three games to go.