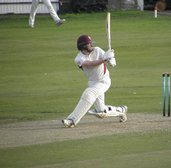 Premier League Champions Illingworth St. Mary's finished off their season in style as they recorded their fifteenth win of the season against visitors Copley.

After winning the toss, the visitors sped to 107-1 with Alex Blagborough leading the charge with 66, ably complemented by Will Rushton's 38 who pushed the score up to 154-3 and a testing target looked in prospect. The return of leading wicket taker Luke Brooksby into the attack prompted a huge turn around in Illingworth fortunes as Copley lost their last seven wickets for just 20 runs with Brooksby picking up five wickets in eight balls. Jamie Moorhouse had earlier taken 4-49 as Copley fell for an under par 174 and using only 38 overs.

In reply, the hosts looked to be in little trouble at 53-1 but, in the face of penetrating bowling from Oliver Thorpe, were suddenly up against it at 69-7 with only Hamza Mehmood stemming the flow of wickets with a well crafted 51. Not for the first time this season, Illingworth's deep batting line up saved the day with Mehmood and man of the match Luke Brooksby putting on 74 for the eighth wicket and an unbeaten 35 for the ninth as Brooksby remained not out with 63 from just 71 balls to steer his team to victory by two wickets. Thorpe was the pick of the Copley bowlers with 4-23.