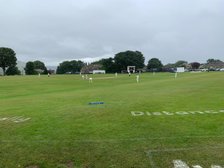 32 overs a side contents results in 25 run win

After weeks of hard work from members to get the ground ready in relation to ECB guidance, the 1st XI put in a solid performance to beat last year's Parish Cup winners Thornton.

2nd XI and 3rd XI players helped run the bar and acquire NHS Test, Track and Trace details on the gate, along with other members who contributed in many other ways. The 1st XI would like to place on record a thanks to everyone who helped prepare the ground and ensure the procedures ran smoothly throughout the day. 149 people were in attendance throughout the day, with 59 cars coming through the gates.

Rain reduced the match to a 32 overs per side contest, with Thornton winning the toss and electing to bowl. A solid batting platform was laid thanks to Hamza Mehmood, who was promoted to opener, scoring 43. He was ably supported by Matthew Smith (25) and Richard Farrell-Smith (14). Mehmood and Farrell-Smith fell within seven runs of each other, bringing Stephen Cook and Veryan Brooksby together. The pair put on 56 in just 40 balls before Brooksby got caught for 28 off 22 balls. Cook continued to find the boundary and ended unbeaten on 35 off 33 balls. Illingworth set Thornton a target of 170 from 32 overs.

In reply, Thornton lost two early wickets but this brought the Hutchinson brothers together. The pair batted watchfully, thanks in part to debutant Jack Hemblys, who went at just three an over for most of his spell, before beginning to up the pace early in the second half of the innings. Just as the dangerous Josh Hutchinson was looking to go big, he got caught out on the deep mid-wicket boundary by a leaping Luke Brooksby. This left a lot of work for his brother Nikki to do. A few sixes to the white wall followed before Brooksby returned to the attack to bowl Hutchinson for 76. Jamie Moorhouse picked up two more wickets as the Thornton reply fizzled out, ending on 144 for 6.