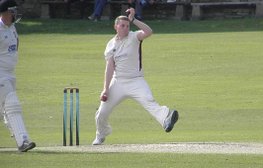 The 1st XI snatched victory from the jaws of defeat with an excellent second half performance at home to Warley.

The visitors put Illingworth into bat, and the home side made a solid start, reaching 73 for 3 at the halfway stage, Callum Cook's 33 being the top score for the innings. Wickets fell regularly over the next ten overs, with only a further 30 runs being added before being bowled out for 103. Stephen Cook (23) and Josh Cooper (15) were the only other batters to reach double figures.

Warley replied with a steady pace and skipper Cameron van Rensberg, who earlier took 6 for 16, and Maxwell Rawson put on 46 for the fourth wicket in what looked to be a match winning partnership. Jamie Moorhouse (3 for 33) had earlier taken the first three wickets to leave Warley on 28-3. When Rawson (21) was run out by Veryan Brooksby with the score on 74-3, an extraordinary collapse followed. Ben Robertshaw and Matthew Watson came into the attack and took wickets instantly. Robertshaw's first came courtesy of an outstanding stumping down the leg-side from keeper Josh Cooper. Watson then accounted for Warley's two danger men, with Greg Keywood going for a duck and van Rensberg falling for 36. Ben Robertshaw claimed two more victims before Stephen Cook returned to the attack to bowl John Clay and leave Warley 14 runs short.