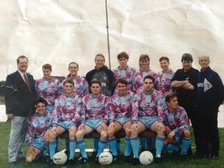 IMMINGHAM TOWN FOOTBALL CLUB was originally born over a hundred years ago in 1912. It continued all the way until the mid 1960’s before it folded and was then re-established a few years later.

The halcyon years saw the club play in the Northern Counties East League in the 1980’s and 90’s after developing the Woodland Avenue Ground and adding floodlights. However the club couldn’t sustain itself and folded at the end of the 1994-95 season. The ground fell into dis-repair and a fire years later saw the clubhouse burnt to the ground. It became an eyesore and a major loss to the community.

The vision of local man Johnny Walker has seen a new project to revive the football club and return Woodlands Avenue to its former glories as a football ground for the people of Immingham.

The Future is Unwritten ...

A more in depth look back on the history of Immingham Town will appear here in due course.