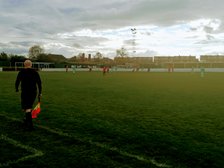 A positive away display from Ingles despite penalty misfortune.

Luck was not on our side as we travelled to Shirebrook on Saturday afternoon resulting in our FA Vase exit.

A first minute goal for the hosts provided by Jacob France was followed by a great response from us. We showed great character to come back into the game, despite a missed penalty. A naughty equaliser from Dan Tuck levelled the scores toward the end of the first half. A rather disjointed second half followed, thanks to both the competitive nature of the tie and the match officials. With the scores level at the 90, penalties were needed to settle things with Shirebrook running out winners in sudden death.

A change of shape for Ingles saw us opt to a back 4, with 16 year old Declan Warren making his first team debut at fullback. September POTM Shay Abell was unavailable and Ollie Buchanan returned to the first XI between the sticks. Mitch Woodbine returned to the starting XI and replaces Jordan Sanders who we wish a speedy recovery from a facial injury, sustained last weekend vs Heanor Town.

The match started in the worst way possible for us. With quite literally the first phase of play Shirebrook found themselves ahead much to our disbelief. A square ball across the box wasn’t dealt with, leaving Buchanan a bystander as Jacob France arrived at the back post to slot home. Shirebrook wasted no time in trying to impose their will further on the tie, creating multiple chances after their goal, but our side regrouped quickly to weather the storm.

It wasn't long before we found our feet and started to create, Dan Tuck was a nuisance from the off and it was a great sequence involving Snaith and Bowley to find him in space on the edge of the box, his shot on the turn unfortunately off target.

Snaith had a great game at the core of our midfield, tracking back well from the halfway line to deal with Jessop’s run in behind for the home side. The resulting corner was a dangerous one and needed to be cleared off the line by Warren.

About halfway through the first half Shirebrook gifted us a route back into the game. Billy Snaith did well again bursting across the box and was brought down for a penalty. Jordan McCourt stepped up to take and had his effort saved by Michael Ball. Unlucky Jordan!

Our pressure continued despite the setback, and it was not long before our efforts were rewarded. Dan Tuck picked up the ball and did very well to equalise. On the edge of the box he looked up and spotted Ball slightly off his line, his dinked effort was weighted perfectly and floated over the keeper into the back of the net, much to our enjoyment.

Following the equaliser it was a very open game with both sides attacking and defending well to keep the scores level. Declan Warren did very well in his 1v1 down the right hand side and had a brilliant game in general, not looking out of place against opponents years older than him. Well done Dec.

The second half started strongly for us as we pushed for the lead we felt we deserved after missing the early penalty. Chances came early for Copson and Woodbine, Dean was relentless as always, working hard at centre forward throughout the 90. It was a really positive display after going 1-0 down early on.

Warren’s debut was marred by a yellow card in what was a strange decision given that he won the ball with said tackle, this incident started a trend of both teams getting overly involved in the refereeing decisions, which there were a lot of. As a result of this, the flow of the game became very stop start which was disappointing considering our positive momentum.

Despite this, we kept moving the ball when we had it and making good chances. Mitch Woodbine had a great second half. His ball in from the wing found an arriving Dean Copson in the box and his headed effort was marginally wide. Chances continued to come from Mitch, the closest being a volley which only the post could keep out. His last effort before being substituted for Morgan Schuler was a dangerous free kick which narrowly missed. Think it's safe to say he did everything but score in that second half. Unlucky Mitch.

Josh Turner replaced Grant Mitchell for the home side and gave them an attacking injection. Causing our defence multiple problems and forcing action from Buchanan who did enough to keep the scores level more than once.

Callum Payne came on for Billy Snaith as we pushed for a winner and in the end it was a game either side could have won with a flurry of late chances for both sides. Our back four had a much better game and did very well to soak up the home pressure and give us a solid platform to build on. However given the nature of the game penalties seemed likely from the 80th minute to me.

A rather tense penalty shootout followed, With Adam Boulter, Michael Tuck and Dean Copson all making no mistakes from 12 yards out. Jordan McCourt had a score to settle with the spot after earlier, and he did just that. Unfortunately, Josh Bowley had a brilliant effort saved by Ball.

It was Ollie Buchanan’s moment as he produced a great save to take the shootout to sudden death. Callum Payne stepped up and was distraught to see his effort bounce back off the crossbar. Jacob France had to score to win it, and he converted to take Shirebrook through to the next round.

It takes a certain type of person to put themselves forward to take a penalty, I know I’d find it easier to keep my hand down. Both Payne and Bowley can hold their heads up high.
It’s a gutting way to lose any game but football is a cruel sport sometimes, I couldn’t fault any of the lads involved on Saturday, with lots of positives to build upon. Full credit to Shirebrook who gave a solid performance in what was a very entertaining tie.

It's a return to home action for us next Saturday after a lengthy period on the road, as we welcome Eastwood to the Dovecote in another big game.