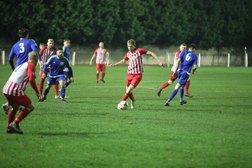 On the eve of England’s latest lockdown, fans at the Dovecote witnessed a great contest in our final game for a month.

Goals from Michael Tuck and Billy Snaith were denied match winning status by goals from Jack Jepson and Jesse Vowles for the away team. The hero of the night was Shay Abell, as Dunkirk were awarded a penalty with the last kick of the game. Shay stepped up, and saved to keep the game tied and win us a point.

The game started out with Dunkirk on the front foot, pacey up front they had an early penalty shout with the first attack of the game. The referee saw nothing doing and play continued. Straight down the other end and less than a minute later we had the lead. It was a great ball into the box and Captain Michael Tuck popped up in the middle to head home, nutmegging the keeper in the process.

The game kicked into life after the opening goal, with Dunkirk looking lively going forward. Big tackles were flying in from early on, and the game had great energy and flow. Our front three covered every blade of grass pressing out, and some encouraging football was played.

However it was not long till the away side pegged us back. Not going to speak too much on the decision, I’m sure both sides will agree the referee didn't have the best night. Adam Bowley was unlucky to be penalised whilst contesting a header, the ball was sandwiched between the arms of the two players and Bowley was on the bad end of the decision. The referee pointed to the spot and No.9 for the away side Jack Jepson stepped up and made no mistakes in finishing the spot kick.

It was a completely different game with the scores tied, both sides had good phases going forward and the game was certainly watchable at this point. Woodbine’s shot from distance needed saving by the keeper who could only parry the ball out.

It was the away team who pulled the next punch though. A moment of confusion at the back for us as we struggled to clear the ball. The deflected clearance fell back to Jesse Vowles near the edge of the box. He steadied himself before lashing the ball into the roof of the net.

Despite that goal and the final score I want to take a few words to mention our back 4 on the night. Bowley, Warren, Boulter and Tuck all left it all on the pitch and in my opinion gave a very hardworking performance given the back and forth nature of the game.

The second half was a better one for us. McCourt moved the ball well across the midfield for Sanders who pushed behind and fizzed the ball into the box finding Copson. He was unlucky not to equalise as the contact wasn’t as he would have liked which put the finish over the bar

We pressed well in search of our equaliser, knocking the ball about well. A Bowley for Bowley substitution with Josh coming on gave us an injection of energy and it wasn't long before we found our equaliser. Mitch Woodbine weaved through midfield before curling a shot on target, the crossbar denied him but the ball fell to Billy Snaith. More often than not in the right place at the right time he lashed the ball past the keeper to make it 2-2.

This was a good spell for us and it almost got better with a strong penalty shout. Very strange decision from the referee but we still had a result to get. The majority of the second half was very competitive with lots of big tackles and 50/50s and was a great watch.

The next change was a forced one as Adam Boulter had to make way after picking up a nasty looking knock to his leg. Could see how upset he was to have to come off. Vijay Godhania replaced him to try and see the 90 out Abbas Jah also made an appearance off the bench.

Dunkirk were applying the pressure very late on in search of a winner and they almost found one. With virtually the last attack of the game their forward was brought down in the box and the referee pointed to the spot without hesitation.

Jepson stepped up with confidence, having already converted once from the spot on the night. Enter Shay Abell. The 19 year old stopper has proved his worth time and time again this season and tonight was no exception. He got down well to save and ushered the rebound out for a goal kick and the final whistle, much to the joy of everyone at the club.

All in all it was a characterful display from Ingles, going 3 games without losing gives us a solid platform to build upon after this November lockdown is over. Every lad on the pitch gave it their all for both teams, and it was great to see so many people out on a cold evening to enjoy grassroots football. Best wishes to Dunkirk for the rest of their season, and we hope everyone stays safe and well throughout the lockdown.