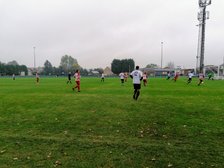 Ingles suffer a 4-0 loss away from home to Heanor

A strong Heanor performance on Saturday afternoon ensured another loss on the road for Ingles.

Two early goals which capitalised on defensive mistakes from us told the story of the game from pretty early on for us. However, a stronger spell for us towards the middle of the game was not enough to bring us back into the tie, with Heanor managing the game well and scoring another two goals on the break as we committed men forward. A brace of goals from Sam Vickers and goals from debuting Tom Batterham and Corbi Brown were the difference on a wet afternoon in Derbyshire.

Dan Tuck moved to left wing back in the continued absence of Rawson, and Vijay Godhania slotted into the midfield in what were the two changes to our side following last Tuesday’s match at Clifton.

It was quite frankly a disastrous start to the game for us, Heanor started the sharper side and it wasn’t long before we were punished. A wayward clearance was swiftly intercepted by Sam Vickers. Abell got a hand to his shot but the shot rolled over the line with Brownett only able to clear into the roof of his net.

The second came mere minutes after. A mix up in the back three allowed Corbi Brown to break through the line and finish under Abell to put the hosts two nil up inside the first 15 minutes.

These mistakes left us with a mountain to climb very early on, a mountain which would have been higher if it wasn’t for Jack Brownett who cleared the ball off the line to keep us somewhat in the tie.

Credit to our lads we soon settled into the game, and worked hard for the rest of the first half, but found it difficult to make inroads against what was a very solid Heanor side.

We had good phases of possession moving the ball through the midfield well, just struggled with that final ball to release the forwards which was the story of the 90 for us. Our best chance of the half came at the end of it.

Josh Bowley was persistent down the right and his pullback into the box wasn’t dealt with well by the hosts. Following the resulting scramble, the ball fell nicely to Jordan Sanders but he couldn't keep his shot down as it flew narrowly over the bar.

Half time brought a change for the hosts, as the scorer Brown went off with a knock and was replaced by Benger.

We started the second half well and our first chance came from a corner. The rebound falls back to McCourt on the edge of the box who has loads of time. The cross is a good one but unfortunately Brownett can't keep his header on target.

This marked the start of a good spell for us as we searched for a way back into the tie. McCourt again linking up with Copson this time. The latter holds up the ball and puts McCourt in behind, but his pullback was just a yard or so behind Copson’s run.

Double change followed, for the hosts Daley came off for Taylor, and for Ingles Worthington replaced Copson, who put in another good shift.

It wasn't long till Worthington found himself involved in a succession of chances for us. A great strike from distance by Snaith could only be parried by the keeper to Worthington, who adjusts and shoots but to no avail.

Sub for Ingles as Sykes replaced Josh Bowley down the right hand side.

It wasn't long until he made an impact either, a great move starting with Snaith and ending with Sykes’ looping cross into the box, Jordan Sanders rose to meet it but fell foul to an ugly clash of heads with the opposition defender. He was substituted after, Andy Hickey came on in replacement.

The substitutes were making an impact for us as chances kept being created. Billy Snaith putting his body on the line to get to a through ball resulted in a clash that left three players down in the box, including the opposition goalie. All were okay though which is good to see.

It was another frustrating afternoon because despite our best efforts and chances, we were not able to convert and found ourselves conceding a third against the run of play.

Thomas Batterham latched onto a long ball forward and used his pace to get in behind and beat Abell, scoring on his debut for the home side.

The fourth followed shortly and capped off a disappointing afternoon. Another swift counterattacking move from the hosts, Sam Vickers took the ball well on the run and finished to get his second of the afternoon.

This was a frustrating watch from a spectators point of view, but all credit to Heanor who capitalised and defended well as we pushed to get back into the tie. Take nothing away from their performance.

Next up for Ingles is a massive game away in the FA Vase against Shirebrook Town. Qualification would be massive for the club and everyone at Ingles is looking forward to Saturday afternoon.