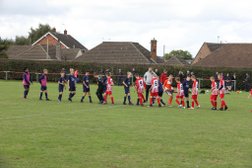 After the success of the clubs two junior teams this season we are looking to expand this area for the 2021/22 season.

We currently have an under 10's and under 11s side (under 11s & under 12s 2021/22 season) and would be looking for any other age groups interested in joining the club. Both our current junior sides are having excellent seasons and have fitted into the club brilliantly.
The club is big on building a bridge between the junior and mens teams with the juniors regularly seen at mens games as well as taking part in matches before the mens game.

The club is keen to provide a pathway for junior players in the Shepshed, Loughborough & surrounding area into Mens football with plans to develop and Under 18s floodlit team in the near future. The club has grown rapidly over the last 8 years with the mens team competing at step 6 of the non league pyramid and the reserves playing Leicestershire Senior League football. Over the years we have seen a host of local players get the chance to play a good standard of football and go on to play even higher.

If your side is interested in a change or you were interested in starting a new side and would like to chat to the club then feel free to contact us via social media or email inglesfcshepshed@gmail.com.
Age groups interested in building start from under 6/7s up.