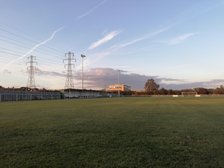 No fortune for Ingles away at Clifton All Whites.

It was another tough 90 minutes for Ingles in our first away assignment of the season.

A great solo effort from Haughton and a second half brace from Smith went unanswered, in what was a frustrating 90 minutes for Ingles. Yet again, we could not be faulted for our effort throughout the game. Clifton got their goal and protected it well before taking their chances on the break, and were great value for the 3 points on the night.

Michael Tuck returned and reclaimed the armband from Adam Boulter, who kept his place in the starting XI. In the absence of Rawson who fractured his collarbone on Saturday, Copson moved to left wing back and Jordan Sanders started at Striker.

The match started a bit slower than others before it, with both teams taking a more measured approach to proceedings. We had a good share of possession in the early stages and were knocking the ball around the midfield well. McCourt picked up the ball in the pocket, he was playing a deeper role on the night. He dinked a lovely through ball to Dan Tuck who was unfortunately flagged offside. First clear chance of the night fell to the Clifton winger Seaton, who had a great game. Beating his man on the edge of the box, he drove inside but dragged his shot wide of the post.

Straight up the other end and it was Josh Bowley creating a chance for us out of practically nothing. Pouncing on a loose ball from the left back he held up the play well, Billy Snaith was alert and took over, pushing into the box and firing at goal. His shot narrowly found the side netting.

Dean Copson started the season as a striker but filled in for Rawson tonight at LWB and put in a great shift. Showing great energy and desire up and down the left throughout the first half. He was involved in a great move with McCourt and Tuck throughout the midfield, we were moving the ball well but the end product was just missing. Woodbines shot just over the bar.

Clifton were playing to the physical advantages their two strikers possessed. A long cross from the left found a white head in the box, forcing Abell to make his first save albeit a comfortable one. It wasn’t long however until this paid off for the hosts. Alex Haughton picked up the ball and utilised his strength to turn and run, beating his man and producing a great finish into the bottom left corner. 1-0

Once again our response to going behind was good, heads remained up and we kept on trying to play our game. Woodbine produced a defence splitting ball which played Bowley in behind, problematic as always. In an unselfish manner he tried to square the ball but only found a white shirt, but the play was promising. As the half drew to a close the game became a very physical contest as Clifton defended well, protecting their lead and making life very difficult for us.

Both sides came out fighting in the second half, with Clifton looking to double their lead and Ingles looking to equalise. Seaton produced a lovely bit of skill inside the box to set himself up for a volley which narrowly missed for the home side.

About 10 minutes into the second half the game changed. Seaton again was in behind down the left hand side, Abell came rushing out to meet him and forced the shot early which was running towards the far post. Smith pops up and taps the ball in at the far post.

Abell was further up the pitch than the striker when coming out to meet Seaton. With the ball making no contact with Abell after the shot, we were waiting for the seemingly obvious call of offside which never came. Shocking decision but that’s football sometimes.

Credit to our lads who although frustrated kept going and trying to drag us back into the game, despite now having a mountain to climb. Another good chance for Woodbine who worked his way into the box with his shot smashing into the hoarding to the right of the goal. Close again but no joy.

It was starting to feel like one of those nights for us. Clifton became comfortable with their lead and continued to work us hard.

Subs: Chris Sykes came on for Josh Bowley, who limped off after another knock to the ankle. Callum Payne on for Jordan McCourt and Oli Burnett made an appearance as a substitute for Sanders, having been in great goal scoring form for the reserves in recent weeks. Mention to Sanders who put in a shift working really hard up top throughout his time on.

As the game wore on Clifton began to pick up a lot of corners and free kicks, often dangerous ones. Despite the final score Shay Abell had another great game between the sticks and kept the scoreline respectable on more than one occasion. One particular highlight was an acrobatic one handed save to deny Clifton what would have been a spectacular free kick. Well done Shay.

The third goal for Clifton came on the break as we committed bodies forward to try to get back into the game. A great counter attacking move which saw Smith played through behind by a weighted through ball to finish calmly into the bottom corner.

In the end it wasn't a game we deserved a result from, despite our best efforts and bright phases. But the 3-0 scoreline seems harsh to me in what was a much more competitive tie than the scoreline suggests.

Big thanks to Clifton for the hospitality.

Next up for Ingles is another away day. This time we head to Derbyshire to take on Heanor Town on Saturday afternoon. Hopefully a return to winning ways.