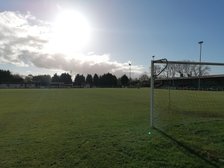 Return to winning ways for resurgent Ingles vs Borrowash.

A very watchable game in the Derbyshire sunshine ends with a much sought after three points.

A very strong first half from us featuring goals from Jordan Sanders on his return from injury and Mitch Woodbine were sandwiched by a penalty for the home side. We had multiple chances to increase our lead and were almost made to pay for them, in what was a very competitive second half until the final whistle.

The game started as most do, with both sides putting themselves out there seeking to impose themselves on the game, in what was a very competitive first ten minutes. However, it wasn’t long before we found a foothold in the game.

Josh Bowley was finding space down the right hand side early on, and some great link up play with Dan Tuck found Bowley with the ball at his feet. Jack Brownett made his way forward from the fullback position, picked up the ball from Bowley and produced an excellent cross from deep to the back post. Jordan Sanders moved well through the box to position himself at the back post, finishing well from a very tight angle for his first goal of the season on his return from a facial injury.

Our Joy was very short lived, however. It was a mere 30 seconds after the restart before the home side broke into the penalty box and were awarded a penalty, much to the frustration of our technical area. Joel Isaac took on the responsibility and calmly finished to level the scores.

This was the start of what turned out to be a very interesting game to watch. Borrowash had the next chance from a free kick which took a dangerous deflection. Abell had to be on his toes, and was quick to smother the ball to keep the scores level.

It was a pivotal point at the game with it being vital we struck the next blow. Step up Mitch Woodbine, who has been causing issues both wide and through the middle all season long. He used his pace to get in behind and drove into the box, kept his composure and produced a tidy finish into the bottom corner to make it 2-1 to us.

This was the start of a good spell for us where we should have increased our lead. Woodbine and Sanders having multiple chances toward the end of the second half. McCourt and Snaith in midfield were creating well and the latter was unlucky to not score, as the ball fell on the edge of the box but the shot flew over the crossbar.

The second half was a different proposition to the first, but similar in that we should have buried the game when we had the chance. Borrowash were a danger throughout the half and called upon our defence multiple times, Warren, Brownett, Boulter and Tuck all had great games in the back line and put a real shift in.

The first real chance fell to us, as Sanders broke in behind and pushed on into the box. To our surprise the flag went up and was deemed offside by the linesman from yards behind the play. Less said about that one the better.

Borrowash came out fighting in the second half and it wasn't long before they had a big chance. The woodwork was the only thing that could keep the scores level, highlighting further the need for a third goal for us.

Changes followed. New boys Fox and Jah came on for Bowley and Sanders respectively. Mention to both who had a great game, Sanders in particular put in a solid performance and was unlucky to not walk away with two goals for his hard work. Well in Jordan. Dean Copson replaced Mitch Woodbine, who was another who shone on the night both creatively and in front of goal.

It wasn’t long before the substitutes combined to make an impact. A defensive mixup from the home side was pounced upon by Fox, who drove into the box with Jah over for the square ball. Fox decided to go it alone and his shot was stopped by the keeper. This was the chance of the second half for sure.

Borrowash were pressuring for the equaliser till the death, and it's safe to say we made it a lot more difficult for ourselves by missing some chances.

All in all it was a gritty performance from our lads to get over the line which should have been more comfortable. All our lads gave everything and it’s great to have that winning feeling back again. Two games unbeaten gives us a platform to build upon. Next up we are at home to Dunkirk FC in midweek action as we hope to kick on.