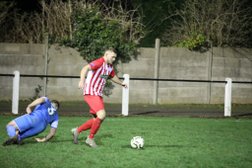 Convincing win away at Teversal

Ingles returned from Teversal with 3 points after a much better performance than the previous week.

After last weeks dismal display at Borrowash , Ingles were able to welcome back 5 players into their squad which significantly strengthened the team after last weeks unavailability. With Vasey still away of Paternity leave, Ajay and Brooks gave Jarvis his first start at left back since signing and also brought back Tuck, Thacker and Captain Blackshaw after all missed last week.

On a cold day and a bobbly pitch Ingles were quickly into their work and after 2 minutes took the lead. Good work to win the ball in midfield allowed Etherington to be set free and he fired his shot through the defenders legs into the bottom corner. This was soon 2 after excellent work by Bowley down the right, his cross found the on rushing Hardy who from 12 yards steered the ball on the volley into the bottom corner. A great finish which was added to by the complete shock on Hardys face at what he had done!
Teversal huffed and puffed in the half but never really troubled Ingles apart form one Thacker slip which was turned of the line by Boulter. Ingles final pass began to leave them, when chances to extend the lead were presenting themselves. It wasnt until the 40th minute that Ingles scored a deserved 3rd when a through ball from Woodbine found Fowkes who calmly slotted under the keeper.

Ingles new Teversal would come out after the 2nd half and look to put pressure on however it was Ingles who should have wrapped up the game after Blackshaw pressured the defender whos slip let him in one on one only for him to make a complete hash of the finish which saw him scoop the ball well over the ball from 8 yards, much to the amusement of all watching.
This miss gave Teversal added belief and for the next 20 minutes they began to pressure Ingles who struggled to get out of their half. This pressure told in the 65 minute when a penalty was awarded after the ball struck Boulters hand. The penalty was converted which only further enhanced Teversals pressure. Ingles to their credit rode this out with some good blocks and the back 4 held things together.
Ingles started to look dangerous on the break with Woodbine causing problems with his pace but it was substitute Bryans who get in between two defenders to fire Ingles 4th and seal the win in the 80th minute. This knocked the stuffing out of Teversal and ended the game as a contest.

Nice to get the new decade off to a good start and also move the team up to 8th in the table with some games in hand on teams above them. Today showed that with good availability the team are very good and could challenge at the higher ends of the table. With lots to play for this season including Tuesdays County Cup 1/4 final and our league cup game, plus a top 6 push, it should be an exciting end to the season.