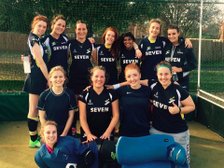 Solid start to the season!!

Saturday morning on wet/ windy soaking day in Norwich. Ipswich seven ladies 2’s went and played Norwich dragons 3’s at 11am and smashed the game when we went and won 2-0. What a great win especially when the weather was so grim from the start to the end. Also awesome start to the season. There’s nothing better than winning.
In the first half the game was quite even with balls flying from every direction from both teams. Ipswich had more possession with the ball as well as more determination to score gaols which resulted with Evie (forward) scoring a goal with a slick flick of her wrist on the stick and flicked it over the goally near where the p spot was scoring us a smooth goal. What a great start 10 mins in. Which was well deserved giving Ipswich sevens 1-0 up. About 15 mins later on in the game with Ipswich and dragons powering on and slipping everywhere players and balls. Ipswich went and scored another goal by Kiya (Forward) myself near the top ish of the D with a power swing and luckily not a miss and got us a goal which hit the back left of the board slightly lifted getting us a cracking goal. Whoop whoop it was now 2-0. So far so good. Ipswich had a lot of scoring opportunities which were taken which was great but there were no more goals which is always something to work. It was not an easy game but Ipswich did well and kept going through this awful weather, kept trying but unfortunately there were no more goals so it was just 2-0 to Ipswich in the end. We learnt a lot and there are always things to work on but well done Ipswich ladies and keep powering on. keep winning. Fingers crossed for this Saturday. Also Thanks a lot to peter and langers for supporting the 2’s and keeping us motivated and going. Giving good advice getting us through the dreadful weather and also sacrificing yourselves as well getting wet and staying positive which always helps.
I forgot to mention well done to Beth and Laura for getting joint MoM very well deserved. Everyone played well and tried there best so everyone well done.
Share via
FacebookTwitter
https://www.pitchero.com/clubs
Recent news