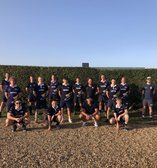 A close affair with Norfolk neighbours

Ipswich travelled to Harleston Magpies for their final pre-season encounter, having come off the back of two wins against IES and Bury. Coach Craig Wiid was full of optimism and selected his strongest squad to date with Cameron Lyle and Robin Johnson being the only noticeable absentees; missing the game due to illness and spousal pressure respectively.

Ipswich started brightly and looked composed and threatening on the ball. Early chances fell to the lively Will Chrystal who looked keen on repaying the Ipswich board who delved deep into their pockets over the summer to entice him away from the lucrative Estonian Premier League he was set to star in.

Despite the early chances, Ipswich failed to break the deadlock with a typically well-organised Magpies side soaking up the pressure and looking to gain advantage on the counterattack.

Sure enough, the home side took the lead mid-way through the first quarter with a well worked goal that even keeper Jez Blake could do nothing about.

Undeterred, Ipswich maintained their high tempo and looked more likely to score than their national league opposition for the remainder of the half. It is a sign of a good side, however, who can still grind out results and Harleston extended their lead in the second quarter before Ipswich pulled one back. A slick move down the left flank saw the spritely Chrystal penetrate the circle and his cross- come-shot was expertly slotted home by Sam ‘sniffer’ Stowe on the far post, who seemed as surprised as anyone to be that high up the pitch.

Coach Wiid demanded more from his players in the second half and adopted the characteristically offensive approach that the adoring travelling fans have come to expect from the South African poster-boy. Ipswich failed to convert several excellent opportunities before a lapse in defensive and goalkeeper concentration allowed Harleston to restore their two-goal advantage.

Ipswich threw caution to the wind in search of goals and were desperately unlucky to have what looked like a perfectly good goal disallowed. However, the action replay confirmed that youngster, Owen Lloyd had in fact propelled the ball into the goal using his face after Cutting’s shot had ricocheted off the post following an incredible solo run.

Ipswich defensive veterans, James Southgate and Josh Fry, were ordered to move into midfield by Wiid and the calculated risk paid off. With ten minutes remaining in the match, Lloyd redeemed himself with a mazy run that fortuitously fell kindly to Ollie Cook who slotted past the keeper from close range.

The game was set for a frantic finish as Ipswich searched for an equaliser, but it was not to be. At the final whistle it finished 3-2 to the hosts.

Coach Craig Wiid now faces a tough selection decision for Saturday’s first league game of the season. The club’s summer spending spree during lockdown has brought an influx of quality players into the fray and the competition for places has never been tougher. Whilst it’s a favourable position to be in, Wiid refused to let slip to the media who will be in his final squad for Saturday. Said Wiid, “All the players involved in pre-season have performed admirably and I’m extremely excited about the season. I have an abundance of talent to call upon as well as a few other players all hoping for first team hockey. It’s a great position to be in and the season promises to be an adventure.”

Ipswich start their Premier A league campaign next week with a home fixture against Cambridge City. Fans and journalists alike await news on who will be named in the squad.

Blue socks, Blue Shorts, Blue Shirts. Bring own water bottles. We will be meeting in the fields on the other side of the Clubhouse to the pitches. Meet time 2.30pm at Harleston or 1.30pm at Tuddenham Road.