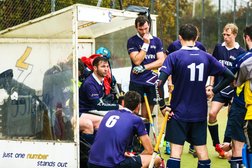 The first of three big games in a row

On a cold autumnal morning, the Ipswich squad arrived at Tuddenham Road skeptical whether their the game against Saffron Walden was going to go ahead as earlier games had been cancelled due to a frozen pitch. After a short inspection the game was given the go ahead and Ipswich started to get their heads in the game.

A strong warm-up helped Ipswich start the game with vigor, linking the defence, midfield and forwards well. A strong attack from Girling led to the first short corner of the game. Cutting’s drag flick was rebounded back to Saffron Walden, who’s counter attacked was no match for Fry who once again stopped them in their tracks.

Saffron Walden tried to press Ipswich but the cool heads of Youngman, Fry and Dykes at the back and workhorse Johnson in the middle, they were no match for Ipswich who continued to move the ball out of the defence. They passed up the line and with a leading run, Dunnett took the ball on his reverse and rocketed it through the goalies legs to put Ipswich in the lead. Ipswich had another chance just before half time that came from a silky run and ball control from Fry, as he took the ball to the byline and across to Cutting who missed the open goal from a yard out.

Following the half time break Ipswich gk, Gladding, kept Ipswich ahead with a number of full stretch saves. Ipswich struggled in parts to keep their structure missing Southgate’s presence in the middle due to illness. Cutting made up for his earlier miss-connection with a neat lob pass over the keeper from Devitt, increasing Ipswich’s lead to 2-0.

The goals kept coming for Ipswich when a pass from Girling was rebounded to top of the D where Dunnett was waiting to drill it into the bottom corner. Ipswich lost concentration once again which led to a Saffron Walden attack and their first goal of the game closing the gap to 3-1.

Ipswich were thankful for their bench towards the end of the game with Doig, Trembath and Mayhew playing a massive factor in providing support and relief for the rest of the squad. Both teams continued to have their chances but Ipswich were the only one who could capitaliseon these with another reverse stick strike from the top d into the Saffron Walden goal from Cutting. Leaving the score at the final whistle 4-1 to Ipswich.

Ipswich are now looking forward to the next game against Chelmsford this weekend followed by Letchworth the week after which will also see the arrival of their new coach.