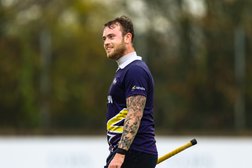 With both Ipswich and Letchworth sharing the same points total (separated only by goal difference), this was set to be a crucial tie. A strong Ipswich squad was boosted by former Olympian and new men’s 1st team coach, Ian Haley.

The opening 20 minutes saw an impressive display of transfers round the back between Tew and Fry, which led to some positive link up play and possession for Ipswich. Southgate and Cutting dominated in central midfield, with Haley's quality clear to see on the left, but the trio's pressure was not converted into scoring opportunities. Just before half time, Letchworth took the lead and soon added a contentious second. Feeling aggrieved to be two goals down going into the break, Ipswich picked themselves up knowing they still had a good opportunity to win the game.

Letchworth forced a couple of good saves from Glading early in the second half. However, the quality of the Ipswich squad soon shone through and the boys in blue drew one back from a Cutting short corner flick. Soon after, a smooth pass from Tew found Dunnett at the top of the D; the Ipswich striker promptly smashed the ball into the goal, bringing the teams level. Ipswich looked like they might turn the game around, but the Hertfordshire side managed to score with 15 minutes to go.

Going behind re-energised Ipswich and some good team work between Wheelhouse and Haley down the left resulted in a short corner. A neatly worked routine gave the experienced Southgate enough time to pick a spot and send the ball to the far corner to equalise. Ipswich were now in control and looking for a winner. Their efforts were soon rewarded through another short corner. This time, a Southgate shot from the top of the D found Cutting, who casually deflected the ball home.
With minutes left on the clock, the Ipswich bench was used liberally and lots of leg work was put in from all players. The Ipswich stamina prevailed as they held on for a deserved 4-3 victory, which sees them leapfrog Letchworth in the league.

MOM: James Southgate
DOD: Henry Langton for being 'a melt'