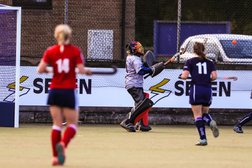 In an end to end game where both teams looked like they could take the points, it was Barnes who scored at the death to secure the win.

Ipswich started well with some great attacking play by the forward line of Chloe Williams and Lizzy Wheelhouse.
But it was Barnes who ramped up the pressure, winning a string of PCs which they failed to convert thanks to some textbook defensive work by Ipswich.

Newcomer to the squad Maddy Barnes created space in the middle of the pitch allowing balls to be threaded through to the forwards with Steph Allen unlucky not to get on the end of a fantastic cross by Wheelhouse. Barnes had two goals disallowed, but maintained pressure on Ipswich’s player of the match, GK Ali Barham who kept them in the game until the very end.

With Ipswich beginning to tire, mistakes crept in and further PCs for Barnes were defended well. Ipswich’s hard work was rewarded with two PC’s which sadly they failed to convert.

It was beginning to look like the points would be shared until Ipswich squandered possession on the left hand side of the pitch, enabling Barnes to race forwards outnumbering the defence. With less than a minute to go, Barnes slotted the ball around Barham leaving Ipswich with their heads in their hands and no time left to counter.

Next week sees Ipswich play their first away fixture at newcomers to the league and local rivals Chelmsford.