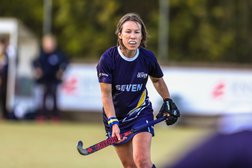 Ipswich Ladies were looking to follow up on their impressive win over Cambridge City last week, with a tough away derby match ahead at IES.

This was the first time in a long time that these two first team sides had met in the league, and although only situated down the road, we knew that IES would have the home advantage.

Both teams started well, with some feisty tackles coming in straight from the start. Ipswich Seven HC had the majority of possession and soon found their way into the IES defensive 25, leading to the first corner of the game. No luck this time round but good build up play led to more corners and it was from one of these that Ipswich won a penalty stroke, with the first runner for IES missing the ball and wiping out an Ipswich player. Sophie Sexton stepped up following her impressive stroke in a previous game but unfortunately, the penalty was just pulled wide of the left post.

The game became more fractious with multiple stoppages in play due to poor tackles, with the majority of the free hits being awarded to Ipswich. However, some nice play in the middle from Grace Nicholls saw her weave through the IES midfield and opened up the defence. Emma Miller had made a run from deep to latch on to a perfectly weighted pass from Nicholls only to force a good save from the IES keeper.

The second half started better, with Ipswich having the majority of the possession and focusing on patient build up utilising the wide areas of the pitch. IES threatened with some breakaway attacks but these were well nullified by a strong Ipswich back three of Kat, Keisha and Ellie. Several chances were created, with Lizzy Wheelhouse hitting the post, and more short corners. It was from a quick free hit that we finally undid the IES defence, with Poppy finding Lizzy in the attacking D and lifting it into net of the goal, breaking the deadlock.

Ipswich had finally cracked IES’ resilience and this led to further positive play, with some excellent passing through the channels from our defence and midfield. Another penalty corner was awarded and this time Dunnett and Sexton played a one-two before the former fired through the legs of the keeper. This killed off the game and Ipswich just had to keep alert to dangerous attacks and see the game out.

There were some great individual displays meaning it was a close vote, but an excellent performance from Emma Miller saw her receive player of the match. Our next game is against a strong Peterborough side back at Tuddenham Road.