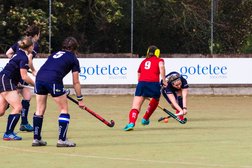 Today saw a strong and well drilled Peterborough side visit Tuddenham Road. The day started off brightly, with a sunny outdoor team talk, but as the whistle blew to begin the game it threatened to become a miserable autumn day game.

Both teams started brightly, but it was Peterborough who converted first. A break away down the right hand side with a ball into a dangerous area of the D. This was well saved by Allie Olding but slight miscommunication to clear the ball ended in an Ipswich foot. COP played a short ball to the left handside of the D and the slapped attempt on goal deflected off an Ipswich foot and in.

Ipswich knew they had to be more patient in the build up and their skill and pressure would pay off. From this Ipswich won a couple of short corners in the space of 5 minutes. It was with the second that Ipswich converted, more link up play from Sophie Sexton deceiving the number one runner and slipping it to Lucy Dunnett who scored near post. Some excellent and patient defending from Blake and Scott saw them force errors from COP forwards to nullify any threats in the Ipswich half. 1-1 at HT.

From this point the home team seemed to settle. The second half saw Ipswich press much better, and turn the ball over higher up the pitch. A fantastic piece of play on the right hand side saw Sexton’s ariel from the halfway line, picked out of the air by Kate Wingar, who created the 2-v-1 and passed to Eloise Ward on the baseline and crossed dangerously into the D only to run straight through with the Ipswich forward not able to make contact with the ball on the run.

Ipswich continued to work the ball well, the Ipswich midfield finding pockets and some dazzling skills on show to breakthrough to the COP press. Almost a mirror image of play down the right saw the ball with Ward on the baseline again, this time Wheelhouse’s reverse shot just wide of the left post. Ipswich went close on several short corners, going narrowly wide and Blake forcing a save. It was more link up play from Ward and Wheelhouse which saw the latter smash the ball through the keepers legs and put Ipswich ahead.

With under 10 minutes left, and this highlighted the workrate of all of the players to ensure Ipswich held on to the 3 points. Forwards Williams and Nicholls worked tirelessly to win the ball back deep in the Ipswich half as the clock ticked down. The final whistle blew, 2-1 to Ipswich and continuing their unbeaten run, and topping the league table.

POM votes highlighted workrate of all of the team, but Lucy Dunnett ended up overall winner for today.