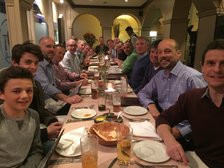 Ipswich M3 continue their very positive start to the season with a straight forward 8-1 away win over Bury 5s.
The game started at some considerable pace and Ipswich were constantly on the attack, causing difficulty for burys defence especially when Cooky dribbled through, it was often like the parting of the Red Sea.

Jake Simpson was also back following last weeks accidental head injury which resulted in a sharp exit and visit to A&E. That accident, and the fact his dad, Simon Simpson was out with a knee injury this week meant Jake was flying and causing issues down the left, working well with Finlay Miller and Ollie Cook on numerous occasions.

Defensively it was a change from the norm with Storm and Ed Downie partnering in central defence, Ant Harper on the left and Henry Hills on the right. There was little to do if I'm honest as Bury only broke on the rare occasion and when they did generally it was mopped up fairly effortlessly. The only single defensive hiccup resulted in the solitary goal conceded, after a break of 4 on 3 and somehow after an initial great first save from Tom Cherry, a follow up allowed it to dribble over the line.

The first half finished 4-1.
The second half was much better all round, with Bury resorting to the odd long ball, but again defensively we were very solid. We are still waiting for the unfortunate Andy Cutting to get on the scoresheet, because each team so far seems to have an aim to not let him score despite his tireless efforts.

The game finished 8-1, and with special mention to Jake Simpson who scored his first hat trick, and Cooky who scored 4, with the other goal being very cleverly scored by Simon Miller.

Next week we are home to Norwich Exiles 1s, where we hope to continue this consistent solid start to the season.