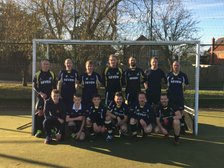 Ipswich Seven’s 3rd team had what looked like a potential banana skin playing Norwich Dragons and it turned out to be a game to forget for many, possibly with a few having their mind already on the mixed starter and Vindaloo options that were on the menu for the evening's outing at Prince Harry’s favourite curry establishment in Suffolk (allegedly). Ipswich welcomed Chris Clough into the side very late on with Ant Harper unavailable as he could not decide which sock was needed to keep his ears warm this week.

Ipswich were thankful for Tom Cherry’s awareness from the off as many players could not maintain any pressure or position for the first half, which was typified by dribbling onto open sticks and lack of passing. Norwich eagerly accepted the offer of repeated cheap posession to attack Ipswich and only some resolute defending by Langton and Gilmour, and some excellent saves from Cherry saved Ipswich’s blushes in the first 20 minutes. Ipswich took the lead after acting skipper Robin Swindin was fouled and in typical selfish fashion, took a self-pass, ran 10 yards into the D and fit a shot across the keeper and into the bottom right hand corner.

The second half was difficult due to a low sun so passing from right to left was more guesswork as everyone was just a silhouette but with a switch in system, Ipswich started to build some possession and went 2 nil up when Swindin, now operating down the right, receive a pass from Ed Downie and somehow outpaced the defender round the and drive along the base line before picking out Ollie Cook who sent his flick screaming into the roof of the net. With their peckers now well and truly up, Ipswich surged forward and an almost identical move, led to the third, with Swindin working the base line to find Cook who unselfishly released Aiden Pearson to slam his shot past the keeper.

Ipswich allowed themselves back to considering the dilemma of plain or spicy poppadum’s and forgot a game was still taking place. A long ball found the Norwich forwards in acres of space and the young forward (who showed real skill against much vaunted opposition), finished at the second attempt past Cherry who was left woefully exposed by a curry hungry defence.

The game petered out and Ipswich were happy with the win but will know they will need to play much better if they want to be considered promotion challengers.